Hara-Kiri: Death of a Samurai 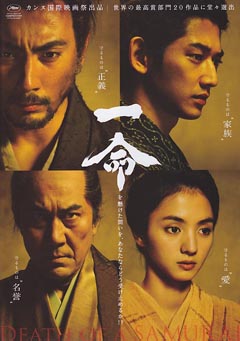 Unlike what some may have led you to believe, Hollywood isn’t the only place with the bug for remaking films, and such is the case with Takashi Miike who just remade 13 Assassins in 2010 and later took on the beloved 1962 Masaki Kobayashi’s classic, Harakiri (切腹), which probably shouldn’t have been remade in the first place.

The story, if you’ve seen the original, is the same — a masterless samurai (Ichikawa), stricken by poverty, requests to commit Seppuku [1] at the house of Ii, headed by Saitou Kageyu (Yakusho). But before he does the deed, he’s told the story of a young samurai (Eita) who came for the same reason and ended up slashing his stomach for his misdeed.

In Hara-Kiri: Death of a Samurai, Takashi Miike seems technically in top form. Just the idea of this being the first period drama shot in 3D is partly exciting, with set designs and cinematography that just pops from the screen as if they were just another player in a film with a number of secondary characters. Not to mention outstanding acting by Ebizo Ichikawa, making quite the back to shape comeback — not only on the big screen, but also back as a kabuki stage actor. In contrast, Eita — yes, he’s one of them one-word name public figures — seems to be pegged as the soft-natured and gentle character, he  is even the mellowest character in Tetsuya Nakashima’s hyper-reality opus Memories of Matsuko, but it works here and fits the character perfectly.

Other big names come on screen, but even antagonist Saitou Kageyu seems to play second field with Koji Yakusho on screen, and the same happens with faces like Naoto Takenaka, Munetaka Aoki and Hirofumi Arai… you could even say these characters could have been played by anyone. However, that’s not the fault of a film, as much as it is an industry issue — the Japanese industry is so tiny, it’s so very easy to play Six Degrees of Separation within it.

There is nothing absolutely wrong with Hara-Kiri: Death of a Samurai, but it begs the question, “Was this really necessary?” It seems like the most interesting change that’s happened here is within the original title of the film. Whereas in the Kobayashi version the title specifically referred to the ritual of the slashing of the stomach in Seppuku, this version’s title of Ichimei refers to someone’s life. The life of a samurai.

Having said all of that, Hikari Mitsushima seems to be putting together an impressive filmography, no?