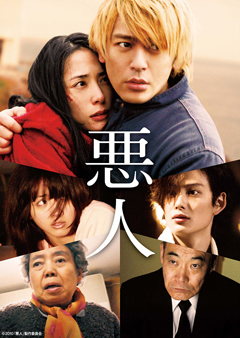 Sang-il Lee is an easy-to-hate director, having directed the saccharine Hula Girls, Lee is neither as stylish as Tetsuya Nakashima (Confessions), nor unbelievably cool like Takashi Miike (13 Assassins) or old school like Yoji Yamada (About her Brother). Of course, they all competed for the honor of being the “best Japanese film of the year” and for a spot to represent Japan at the last edition of the Academy Awards.

Sang-il Lee’s Akunin had a lot to live up to, and I’m glad to say that it actually kind of… works. It tells the story of Shimizu (Tsumabuki), a quiet and rather inadequate young man who meets a girl online — Yoshino (Mitsushima) who just sees him as a guy to pass the time and take advantage of as she waits for her big catch… Keigo (Okada), who is a total jerk.

Yoshino doesn’t care that Keigo treats her like crap because he’s handsome, cool and is loaded. One night, when Yoshino is supposed to meet up with Shimizu, she runs into Keigo and immediately latches onto him. The next day, Yoshino shows up dead.

As Shimizu fulfills the role of the dutiful “son” to his grandparents, he meets Mitsuyo (Fukatsu) online — both seem genuinely interested in each other, but everything turns for the worse when he’s on the run.

Akunin is a crime drama, however, unlike the crimes we’re used to watching, this has little to do with finding out who did it and more about why this person did it. It’s the same basic idea as Confessions, but unlike that film in which the style overpowered the story, Akunin is just about these characters. Is our “villain” really a horrible person? Is the audience required to sympathize with the killer? Throughout the film, yes. It seems like we are given the right situations to feel like we have to side with this person, but the ending seems to be clear.

Except for both the youngest characters on the film, who seem to be just elements to make the protagonist more relatable, people like Shimizu’s grandmother (Kiki) and Yoshino’s father (Emoto) feel really real and put us in their position. What would one do if a member of your family is accused of murder, or what would you do to the person that just left them there?

A film like Akunin raises a lot of questions, and doesn’t necessarily answer them. This actually enhances the experience of watching the film, which doesn’t have cool visuals or striking colors. There’s no action suspense, or horrible people having a turnaround to become better people. The movie is bleak and it gets bleaker, there are glimmers of hope, but they’re just that — glimmers. In the end, the story is all about the choices these people make, and the consequences that these bring.