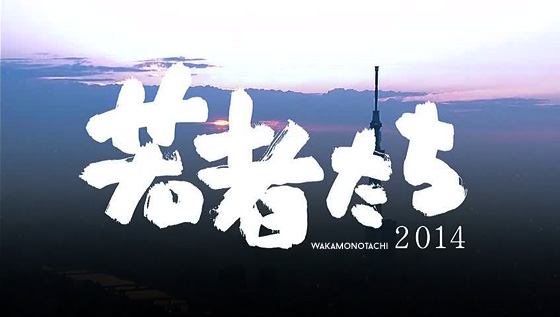 Japan is also in the mood of remaking stuff, so in honor of the 55th anniversary of Fuji TV’s original Wakamonotachi (若者たち) series, they’ve decided to do a 2014 version with an impressive cast list that includes Satoshi Tsumabuki (back as the star on dorama world after his 2009 NHK Taiga drama Tenchijin), Eita, Hikari Mitsushima, Yu Aoi, Ai Hashimoto… and, okay, Masami Nagasawa.

The cast of Orange Days meets Last Friends meets Dr. Koto Shinryojo — I just needed Kou Shibasaki in there somewhere to make it a bombastic casting. It’s almost like the casting director sat down and decided to fancast his perfect show.

Though I’m unsure whether it’s a shot-by-shot (or situation-by-situation) remake, Wakamonotachi 2014 follows the lives of the Sato siblings; Asahi (aka. Asa-ni, Tsumabuki), Hikari (Mitsushima), Haru (Tasuku Emoto) and Tadashi (Shuhei Nomura), a down-on-their-luck family who lost their parents early on their lives, pushing elder brother Asahi into the pavement of roads industry where his father had worked in, supporting his younger siblings through school and university, alongside sister Hikari who is now working as a nurse.

Living by their paychecks, their tribulations continue when Asahi’s girlfriend Azusa (Aoi) informs him she’s pregnant, Hikari reveals that she’s having an affair with family friend -and very much married- Dr. Shinjo (Hidetaka Yoshioka), while passionate theater actor Haru struggles to put on his first show at university, and virginal Tadashi gets acquainted with an eyebrow-raising Kazumi (Hashimoto). Moreover, to top it all off, Satoru (Eita) -the second Sato sibling- has just been released from jail and will establish a symbiotic relationship with Takako (Nagasawa), the daughter of Satoru’s reason to be in jail.

In short, there’s a lot of drama… and surprisingly, there’s a lot of shouting (for a Japanese drama show) throughout that usually ends in quiet moments (with a few tears) of honest reflection. The problem with Wakamonotachi 2014 is that it feels like a 1960s setting with the gadgets of our modern life. That’s just lazy remaking. If the setting is 2014, the project in itself shouldn’t be about five siblings because you’ll find it difficult (I suppose that even more in Japan) to find people in their 20s (with Tsumabuki being almost 34, playing a 29-year-old) who have these many brothers and sisters. I’ll make it three siblings in total, tops. You’ll also find it hard to believe that a high-school dropout who works paving roads will be able to put three younger siblings through school and post-secondary education (and cram school) [1].

Having said that, I do like some of the situations. It’s hard to believe that a developed nation like Japan has so many celebrity unplanned pregnancies and shotgun weddings, but I still believe they are trying to make people have more babies [1]. I SWEAR. Though having Asahi and Azusa accepting to have their kid (eventually) after many obstacles makes sense for the story, it feels like a cop-out to have the “miracle” they were waiting for after Yu Aoi delivers that emotionally-hard speech. Or maybe I’m just terribly biased. My spirit lights up every scene her storyline comes up in, or whenever Tsumabuki is trying to make up for one of his siblings mistakes, or when Eita and Mitsushima aren’t sharing scenes with Yoshioka, because the affair storyline is so damn boring. I’d much rather see what’s cooking with the brother love triangle between Haru, Kazumi and the poor Tadashi.

The acting is addictive, though. I’m giving it a quarter extra of a star for that.