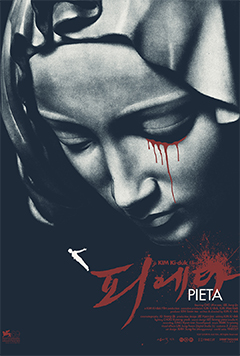 Immediately as it starts, Kim Ki-duk’s Pieta shows us that the writer-director has little interest in taming the brutality of his characters. It starts off with death and is quickly followed by plenty of good old violence. It’s a bleak world full of mistrust, the world of a once-abandoned loan shark, Lee Kang-do (Lee).

There’s little to no subtlety in the way he frames the economic crisis that is supposed to drive the narrative as the collector goes from debtor to debtor. In the hunt to collect money for his bosses, Kang-do cripples men who cannot pay for the insurance. That is, until a woman (Jo) begins to follow him around like a shadow, almost like an angel of death haunting him.

This woman soon becomes to claim she is his mother, helping him with all his a-home tasks and treating him with motherly love. He embraces her after initial hesitation, and only later does his cash collection become replaced by something that goes hand in hand with it: vengeance.

Some of the works in Korean cinema that garner international popularity are abundant in their penchant for vengeance, and there is no doubt that Pieta is another addition to that bunch. A striking amount of the film’s content seems dedicated to simply provoking the audience, from incest to animal cruelty, which hinders what is actually a fairly interesting narrative.

In its high points, when focused on the two main characters instead its socioeconomic commentary, Ki-duk’s film is rather brilliant. It’s dark and toys with its characters mental states surprisingly well, and builds this unsettling relationship between mother and son an an interesting fashion. Even though the zoom is abused on occasion, the film is also beautifully shot, really sealing in the melancholy atmosphere.

The problems that come along with Pieta weigh down on it heavily. A few of the scenes unfortunately lose a lot of the mood and drive that the film originally establishes, and almost teeter into comedy. To add to that, there are a few eye-rolling moments and melodramatic characters that come with the grating first act, seemingly existing only to bash one over the head with how bleak the world is. While this doesn’t take away from the stronger latter half, it certainly makes it rough to get through, but it’s all worth it for the two great lead performances from Lee Jung-jin and Jo Min-su.

All in all, Kim Ki-duk’s Pieta is pretty mixed bag of positive and tiresome features. Whatever there is in it to be praised, it still remains a step down from the impressive work the writer-director has delivered in the past.

Pieta will be screening at KOFFIA in Brisbane, Sydney and Melbourne.

You can also get the film on Bluray, DVD and Instant Video on Amazon | iTunes | First Press Korean Bluray or DVD on YesAsia.