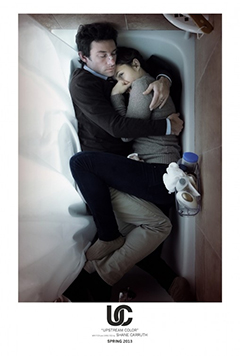 Believe me when I say that entering Upstream Color with an open mind is a requirement, as you will immediately find yourself completely lost within mere minutes. Being lost in a Shane Carruth film isn’t all that of an unfamiliar experience considering Primer‘s own abstract existence, but it’s enough to put off plenty of people. Thankfully, Carruth knows just how to let his story unfold and places his trust in the audience to interpret things on their own.

Upstream Color opens with a man, known as the Thief (Martins), who has discovered some sort of worm that offers him control over a person, just as a magician hypnotizes his participants. His latest victim is Kris (Seimetz), a woman who signs away her home, her money, and practically every thing she owns to this man, all at his behest. The Thief disappears, only to be replaced by some other seemingly ominous figure, The Sampler (Sensenig). This man takes the parasites from humans and places them in pigs. Through this strange process, he is able to see into the lives of the victims, and simultaneously affect them through the pigs.

What is described here is only the film’s first act, which showcases one thing above all: Amy Seimetz’s knack for acting. Seimetz’s dazed performance is entrancing and watching her life get stripped away from her is heartbreaking. She plays this broken woman perfectly, especially after the cold realization that she’s missing days of her life, and when she shakes with fear holding a knife in hand, it provokes a visceral reaction in the audience. At one point she dreamily walks through a room with dozens of people, all of whom seem in as much of a daze as her. It begs the question: how many others have been put through the same traumatic experience?

This question is quickly answered by Shane Carruth, as his own character Jeff is introduced to the picture. When Kris and Jeff meet, one immediately wonders if they have been affected by the same experiment. Why else would these two souls, who seem to have almost nothing in common, be drawn together? The chemistry between them feels strange at first, and rightfully so, as it soon becomes clear that they are both just pigs in The Sampler’s pen.

Kris and Jeff are connected on both a physical and emotional level. This is painfully reinforced by a stressful scene in which their childhood memories begin to blend together. Neither knows who experienced what, and we can how hard it is for them to grasp what it happening to them. When one breaks down, the other breaks down just the same. They can be miles apart and still panic together, fight together, and experience everything that their pigs experience. They also find solace in each other whenever their happiness is stripped from them, as shown in the way they cope with the loss of the children they never had as humans.

As Carruth’s cryptic tale unfolds, his characters come closer to becoming aware of their surroundings, just as the audience becomes aware of how everything comes together. Their memories are opened to sounds, which is one of the most important bits of Upstream Color. Johnny Marshall’s sound editing is a blessing, blending together and transitioning wonderfully from scene to scene. To add to this, Shane Carruth’s composing skills are on parade as his score adds an ethereal touch that’s impossible to overlook.

Another important key to breaking down Upstream Color is Henry David Thoreau’s Walden. Just as Thoreau speaks in metaphors more often than not, Carruth embraces imagery to tell his story and present emotion that words cannot express. Comparisons to Terrence Malick and Andrei Tarkovsky have been drawn and it’s no wonder why considering just how much Carruth embraces the metaphysical. Scenes where he dives down to microscopic levels are reminiscent of the grand scale beauty of The Tree of Life, and he also shares the same intimacy in camera work that Emmanuel Lubezki always brings forth.

There is also a dark contrast to this beauty, as the film gets unsettling often enough. There is a surprising amount of body horror at play here, as we see worms crawling through Seimetz’s skin. From this point on, the film oozes tension from every vein, as a constant sense of paranoia lingers in both Kris and Jeff, both of whom are trapped in this narrative they have no control over. Even amidst the death and darkness however, Carruth shows that beauty can rise out of the bleakest situations, as shown in the blue orchids that complete the cycle of Upstream Color.

This review may be just as cryptic as Upstream Color itself, but it’s truly a beast of another nature. If anything, Shane Carruth’s sophomore feature only solidifies what we knew from his debut: that he is a truly gifted filmmaker.