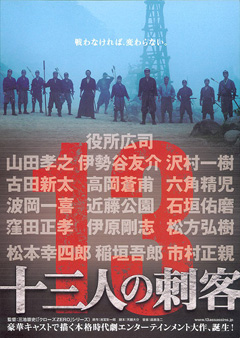 Takashi Miike is not really famous for his samurai flicks, so everyone was surprised about this film and how big it really is. The film has a lot of actors, some more famous than others in and outside Japan… we could say that 13 Assassins is an epic film… a remake of a 1963 version, but epic nonetheless.

Though the film is not a fully-fledge action film, it’s got the elements. Japanese history lends itself for some very confusing twist and turns, and 13 Assassins shows us a period between a time of peace and the start of the Meiji era, which saw the fall of what we’ve come to know as traditional old Japan society and gave way to modern Japan.

In the film, Lord Naritsugu (Inagaki) — who happens to be the son of the previous Shogun, and half-brother of the current Shogun — is bored with the privilege life he had the chance to live. He takes what he wants, when he wants it, how he wants it and doesn’t want to leave anyone behind. In his mind, he’s twisted the way of a honorable samurai, and abuses those around him in the most despicable ways. It is in those scenes during the start of the film that 13 Assassins seems the most Takashi Miike-like, but then it turns into a recruiting film of masterless samurai (aka. ronin), which in turn gives us an epic bloodbath.

The film, however, gets a little confusing with so many characters to keep up with and remembering their names and their ranks become a challenge. Try to figure out who is doing what, we begin seeing the characters not as individuals but as a group. Especially during the elaborate trap, that almost feels a little too genius for the time-frame it had to get constructed.

As a result, 13 Assassins is a very entertaining film that might revive the samurai genre for Western interest, but not enough to create a wave as if it had been a “revenge” film… but that’s another genre altogether.