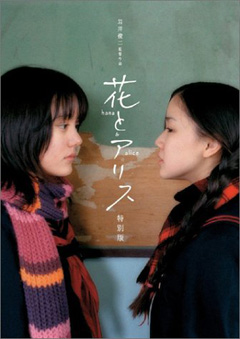 Two best friends who enter high school begin fighting over a boy. You could groan, it sounds like horrible typical garbage, in which one of the girls would understand and accept the other’s relationship with the boy she likes because… that’s the nice human thing to do? The other girl would get together with the boy and live happily ever after.

Not in Japan, or maybe not for Shunji Iwai. Though he keeps telling me on Behind the Scene footage that he wrote Hana & Alice as a love triangle, that started out as a freaking Kit Kat commercial, and that he sees Alice’s (Aoi) character development as a progression of Alice’s abilities to act in front of people, I keep interpreting the film differently. To me Hana & Alice is the story of Alice and her relationship with her best friend, as well as an insight in her relationship with her parents.

Hana (Suzuki) and Alice have been best friends forever since they were little kids, they do everything together as best friends do, but now they’re growing up and going to start attending different high schools. In an overlong winter train ride, Hana and Alice start stalking a mumbling boy (and his mixed pal) that keeps reciting some Rakugo [1], and though Alice is quick to forget about the boys, Hana does end up taking an interest on the Rakugo-mumbling boy, Miyamoto (Kaku), who she would eventually end up meeting at school.

On a rather silly accident, Miyamoto smashes his head and gets told by Hana that he has amnesia, thus not being able to remember that she is his current girlfriend. Completely confounded by this, Miyamoto gets played even more as Alice is introduced into this mad situation and lies start getting out of hand.

It’s been nearly five years since I first saw this film, and on that first year I saw the film five times; each time discovering a new layer to the film and falling deeply in love with it. Though on my first run I felt the film was a little too long crossing the 2hr. mark, there were haunting qualities to it that pushed me back for more re-watching. Though Hana may rub some people the wrong way with her pushy behavior and weird decision-making — what kind of person tells someone they have amnesia so they could be their girlfriends? — it is Alice at the center of it all. And I’m not saying this because I’m a huge Yu Aoi fan at all. This is, in fact, kind of like the convert film for most people.

Not only is her relationship with her best friend tested, but we also get to see her life at home and the kind of relationship she has with both her mother (Aida Shoko) who publicly denies her daughter in front of a possible beau (Abe Hiroshi in a cameo), and her father (Sei Hiraizumi) whose stranded relationship with his daughter bleeds through that painful Wo Ai Ni/Zai Jian (I Love You/Goodbye) scene with her. For more in-depth discussion on this aspect of the film, I invite you to read this post.

Though Hana & Alice sits comfortably at the top of Yu Aoi’s fans’ lists, and maybe some of Shunji Iwai fans’, it’s really hard to deny that some of her best work has come from the hand of Iwai. And while Iwai has been trying to reproduce some of the more delicate dealings of teenagers’ love lives in other stories like Halfway, he’s never reached that balance to attract both a young and more adult audience towards these stories like he has done with Hana & Alice. He also, in turn, creates cinematic magic at points thanks to his collaboration with longtime cinematographer Noboru Shinoda, who sadly passed away that year leaving Iwai in search for that magical vision since. It is thanks to him that we have been given that iconic scene of Aoi ballet-dancing with paper cups, as well as all those wonderful ballet-dancing sequences for Fu’s Dance of the Wind exhibit.