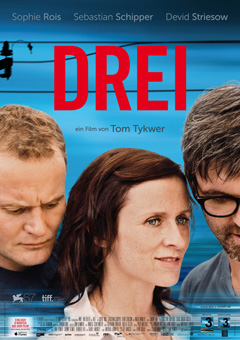 Tom Tykwer’s return to German language film takes the form of Drei, a uncategorizable venture into love, sexuality, and coping that carries as much heart as its passionate director.

Set in an autumnal Berlin, Hanna (Rois) and Simon (Schnipper) have reached a neutral patch in their relationship. After dating for a little over 20 years, they’ve refrained from getting married and have been generally happy working with that set-up.

We are introduced to the couple in the middle of a bit of unrest. Simon is an architect for artists, and Hanna works for the ethics board reviewing medical projects. Simon’s firm is having trouble finding successful projects to design for, while Hanna has hit a sort of ditch in her interests and is finding it difficult to focus.

To add to the chaos, Simon’s mother dies and he subsequently finds out that he has testicular cancer. The audience then has the pleasure of watching him get one of his balls removed. I think the beauty of Simon’s situation is that while this is happening, he and one of the nurses, an old flame of his, catch up while she is cleaning up the surgical surface mid-surgery. This is one of many humbling sequences that create the character of the film. Hanna and Simon’s story is laughable, but can be watched from an entirely serious point of view as well. This is aside from the characteristic dryness of German wit, of course.

I read the opening of the film as a slightly somber expression of the stalemate that was Hanna and Simon’s relationship. Simon is reciting the stages of their relationship in list form saying things like: “work”, “less sex”, and he even mentions “having an affair”. The two are in bed and it is clear that they love each other, but it is also clear that they mutually agree upon the status of their relationship. They’re reasonable, they are relatable, and, more importantly, they are average.

It would seem that this would be all there is to it. A lot of emotional confusion and graphic depictions of testicle removal but, alas, no. At the spine of this film is the inherent issue of the identity crisis. What the plot of Drei so delicately suggests is the elasticity of identity. This is what pushes the film beyond the irrelevance of sexual categories, and into more universal terrain. There is no point in our lives where our personality becomes permanent. There is no relationship that is set in stone, and there is no outlook that is destined to remain unchanged.

It is in this same spirit that we have no scheduled “grown-up” checkpoint where we officially become what we’ve been waiting to be for our entire young lives. Self-actualization is a process with no end and that is not meant to be dismal—it is meant to be inspiring.

That leaves the third wheel and object of the couple’s affections. His name is Adam (Striesow), he is chiseled, beautiful, athletic, and smart. Hanna meets him while reviewing his in-vitro project, and Adam meets him at a local swimming pool. Although it takes Hanna a little while to warm up to him, she eventually does and after a short “hook-up” in the locker room, Simon does the same. In an effort to make a long series of encounters a little more concise, Adam falls in love with both of them completely unaware that they are a couple, and Hanna and Adam both remain unaware of the connection as well. Adam’s character, however, baffles me and I think this might be where my only criticism is.

Adam isn’t an avid reader. This would pass for a small quirk if it weren’t for the fact that this turns into a sort of motif throughout the film. You are reminded on multiple occasions that Adam does not like clutter or reading. This could be a missed point on my part, but I was really unsure of the relevance of his aversion to books. I’d say that his existence as a whole was slightly under-minded. As the third point of the triangle, it’d be nice to know what exactly makes him so appealing to Hanna and Simon but, sadly, you only get part of that from what is conveyed in the film.

Simon seems to be consoled by his presence and Hanna seems to enjoy his edgy behaviour. It seems to have very little to do with the (gratuitous) sex as there is no apparent issue in Hanna and Simon’s sex life. It’s all about the sentimental things, but I wasn’t sure what I was looking for! Adam is also sort of a playboy, but it appears to be because he fears the vulnerability of dependency which is the bulk of what brings him down to Earth because the other sides of his character make him seem like some sort of untouchable superhero.

Don’t forget to check my interview with director Tom Tykwer.