Cabin in the Woods, The 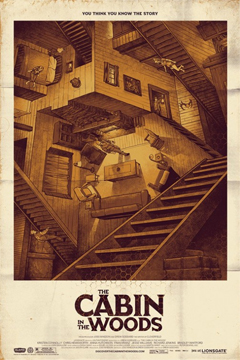 Regardless of trends and clichés, horror is an ever-evolving genre that has been alive since the silent era. Lately, however, things have grown stale and lackluster with each new horror movie that releases. Realizing this, Joss Whedon and Drew Goddard bring us The Cabin in the Woods, an addition to the genre that is part masterpiece and part commentary on the state of the horror film.

The story will instantly be familiar to anyone who has seen a horror film. Five college students shack themselves up in an RV and prepare to head over to a relative’s cabin for the weekend. Each seems to be the usual embodiment of a horror archetype: the jock, the smart guy, the stoner, the whore, and the virgin. Everything continues to follow the traditional path, from doors flying open to a decrepit old man warning them to stay away, but what the gang doesn’t know is that there’s far more at play than they could ever imagine.

Revealing any more of the plot would be a crime to readers who haven’t seen the film yet, as any spoiler at all takes away a little of the magic that comes with watching The Cabin in the Woods. With each scene, we discover more about the fate of this unlucky, unknowing group of people and those working behind the scenes of this gruesome event. Many may credit the film’s success to Joss Whedon and his extensive background in horror, having created shows like Buffy the Vampire Slayer and Angel, but it is his partnership with Drew Goddard, writer of Cloverfield, that makes this a match made in horror heaven.

To put it simply, The Cabin in the Woods is Goddard and Whedon’s love letter to the horror genre. Not only does it capture the true essence of the horror film, it blends buckets of comedy in with the gallons of blood. A number of running gags, plenty of metafictional humor, and dozens of nods to horror films of decades past populate the film. Some of these jokes and references play out more subtly than others, but when the shit hits the fan (and trust me it does), it’ll be hard for any fan of the genre to not die of laughter in their seat.

Comparisons to Scream and Evil Dead II are inevitable due to the comedic nature of the movie, but Cabin is a beast of an entirely different nature. Aside from poking fun at the genre and creating a solid addition to it, it works as a commentary on the state of the horror film. It creates characters with identities that are manipulated into archetypes due to forces out of their control, providing an appropriate on-screen metaphor for the relationship between what audiences want and filmmakers create.

In his debut feature, Drew Goddard proves he knows exactly what he’s doing with a camera. Multiple scenes bring an overwhelming amount of tension, and something so silly as a dare to kiss the head of a wolf that hangs on a wall keeps viewers on the edges of their seats. There is no excess of jump scares, as they are often cheap, but the few that Cabin delivers work just right.

Everyone in the cast does a fine job, and fans of Whedon’s shows will enjoy all the familiar faces to be found in the film. The most valuable players are likely Richard Jenkins and Bradley Whitford, who not only have some of the best lines, but have a buddy chemistry that adds so much to their characters.

Some people won’t like The Cabin in the Woods and to that I’ll say, “You’re crazy.” Horror aficionados will be the ones to love Goddard and Whedon’s film the most, but the last twenty minutes alone should be enough to please pretty much anyone who watches it.