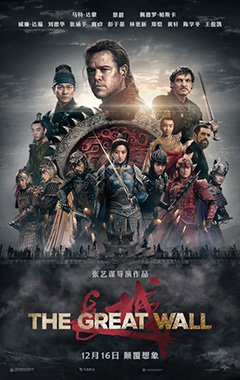 A lot of people are writing their reviews and lengthy opinion pieces about Zhang Yimou’s The Great Wall, the first proper juggernaut production between the US-China, so I decided to join as one of the few people who was actually quite psyched about a Zhang Yimou movie that I could finally watch at a giant multiplex. I only had one big disappointment, Leehom Wang’s and Tang Wei Wei’s song wasn’t included in the credits.

I just want worldwide audiences to learn more about Chinese culture and invention while being entertained by the monster movie.

In terms of content, the publicity was quite transparent— in here, Matt Damon and Pedro Pascal play two European mercenaries, William and Tovar, in search of “black powder” (gunpowder, though the Spanish subtitles do use the word ‘pólvora,’ which is a total miss on the translation part) to steal. On their way to wherever they think they’re going, they’re attacked by some mysterious green monsters known as Tao Tie (饕餮) [Wikipedia], who are early for their attack of the Middle Kingdom, which has set an impressive show of defense in The Nameless Order, a special division of the Imperial Army, led by General Shao (Zhang) and strategist Wang (Lau— OMG!!!).

Unlike Pacific Rim, which westernized and took all the Kaiju movie tropes to feed to Western audiences, Zhang is taking us straight into a run of the mill Chinese period action fantasy like Tsui Hark’s Detective Dee and the Mystery of the Phantom Flame, and selling it to us through the Hollywood worldwide machine. As far as stakes, they’re big— there’s a bunch of creatures out to eat us and destroy civilization, but the twists and turns aren’t there. This isn’t a political thriller, this is a straight forward monster movie designed to attract a Western audience (keyword, not necessarily American), one who isn’t in-the-know of who’s who in the Chinese film industry, which is the main reason all western publicity focused on both mercenaries, while the Chinese publicity did show tons of action footage featuring the rest of the cast. But the biggest selling point is Zhang Yimou, and visually, he doesn’t disappoint.

Due to the fact that you can’t shoot an action movie that takes place in the actual Great Wall, Zhang’s crew built three [1], showing off in what is probably the film’s greatest strength— The Nameless Order’s battle scenes. Accompanied by the amazing war drums and score by Ramin Djawadi, the scenes are grand and so gorgeous to look at as we see Commander Lin Mae (Jing), leaping through the air in color-coded battles. Chinese cinema spares no deaths~ Though Eddie Peng and Kenny Lin don’t get much screen time (leaving the possibility to do a follow-up taking place in their timelines, ala 300: Rise of an Empire), Lu Han does get to do more with his character playing a young and inexperienced soldier.

While we don’t spend much time with General Shao, who plays a sort of father figure to Commander Lin Mae, he sets in motion one of the most gorgeous stand-alone sequences that feature sky lanterns floating into the night sky and one of the best tracks (not available in all the OST versions) titled At the Border [1] by Zhao Muyang (赵牧阳) and our man Wang Leehom. Ramin Djawadi’s score also includes his ode to The Nameless Order simply titled Nameless Order [1], which features a poem by Emperor Gaozu of Han called The Wind’s Song (大风歌) that state “A great wind rises, oh! The clouds are driven away. I come to my native land, oh! Now the world is under my sway. Where can I get brave men, oh! To guard my country!“, though the lyrics are missed without an on-screen translation. But the feelings are there!

My only complaint is that all commanders felt like they should be older, so I would’ve preferred another actress— Zhou Xun or Li Bingbing, who both shared credit on The Message with Zhang Hanyu. It seemed kind of forced to have Commander Lin Mae as English-speaking proxy when Andy Lau’s character spoke English and he’s a strategist, and her character often comes off as a Mary Sue, by virtue of being Chinese, but the perfection in her being is like most supporting female characters in this type of movies.

As far as “Hollywood blockbusters” go, there’s no legitimate reason that this should not make money in the foreign film market— it already surpassed Zhang’s whole historic attendance in Peru on its first day with 34k people, so Zhang Yimou has met his project brief. I’m inclined to give this a full extra half on visual battles alone, but the feels of sacrifice didn’t match those felt during the final scene in that Kaiju movie ;P so extra quarter it is~