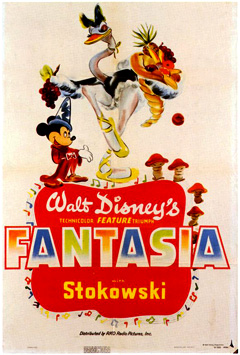 Let’s start this off by saying Fantasia is not for everyone, unless you have at least a minimal interest in film history, animation or classical music, you might find this 1940 animation music staple as confusing as an acid trip.

But my god, what an acid trip.

Yes, the first ten minutes or so, when we’re introduced to the concept of Fantasia, are quite the challenge. I hadn’t seen the film since I was a kid, and the sequences in it were mere flashes in my head. I remembered the dancing hippos, Mickey in The Sorcerer’s Apprentice, and the fairies skate-dancing on ice, but I didn’t remember all this explanation on what music did to the images on your brain.

I miss the times when Disney — hence, newer animation studios too — took such gambles in animation, when it wasn’t about how much money you could make from a franchise, but just how much you could push animation as a medium. We never get to see such experimentation on feature films anymore. We are only left with shorts like Sensology by Michel Gagné.

To fully savor Fantasia as a work of art, you must truly love animation — not only the slick 3D CGI kind, but animation as an art form — only then can you allow yourself the enjoyment of the seamless movement of scorching lava while you witness the origins of the universe. The animation in this 1940 film is as good as ever — clear, crisp and vibrant in high definition. It would look even more impressive on IMAX… or should I even dare to say 3D? [1]. I don’t fully buy it in 3D, but it’d be an even more interesting offer than any of the upcoming 3D conversions coming our way.

While Fantasia has a vast array of classical music and a lot of experimental animation — think of it as a predecessor to the Visual Equalizer on Winamp, Windows Media Player or iTunes — the only segment in the whole film that follows some sort of traditional storytelling structure is The Sorcerer’s Apprentice, which, let’s face it, is the staple scene in Fantasia. Though, I would argue that The Pastoral Symphony is the weakest segment in the film, it hardly diminishes your interest while watching.

You can clearly see all of the elements in Fantasia that inspired other Disney animation sequences — the baby Pegasuses act resembles the Flying Burrito on The Three Caballeros, the centaurettes act a lot like the mermaids in The Little Mermaid, the fairies in The Nutcracker Suite look a lot like early versions of Tinkerbell, and the shadows in the Night on Bald Mountain sequence work a bit like The Lion King sequence when Scar sings Be Prepared [1].

Fantasia is an amazing piece of work that you must watch at the right moment in your life. Man, I would have loved if my school’s music teacher had urged us to watch this as an introduction to classical music when we were kids, maybe then all of us would be more interested in the genre.