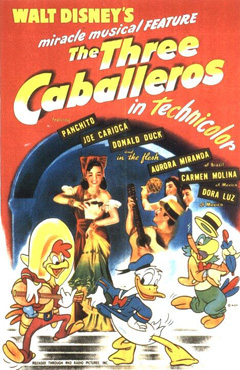 Oh, The Three Caballeros — you are so deep-rooted in my heart. As a child, watching the Latin American dub, I got giddy every time the ever-cold penguin Pablo passing through the coast of Lima.

We’re three happy chappies
With snappy serapes
You’ll find us beneath our sombreros
We’re brave and we’ll stay so
We’re bright as a peso
Who says so? We say so!
The three caballeros

The film — or collection of shorts — start with Donald Duck’s birthday. He opens a gift basket from his friends in Latin America, which contain three gifts. The first one turns out to be a projector with several films that include Pablo the Penguin’s adventures to the tropics, the variety of birds in South America and the story of the little gauchito and his flying burrito (no, not the eating kind).

The second gift is a book about Brazil that includes Jose Carioca, who asks Donald if he’s ever been to Baia and teaches him one or two tricks for samba, conquering women and changing his size by blowing through his index. While the third and final gift comes from Mexico, where we see Panchito and we learn about Mexico.

But to simplify things even more, one way to describe The Three Caballeros is to just call it a Latin American fiesta. Created to improve US and Latin American relations, the film also breaks ground by being one of the first (if not the first) animation to mix in live action, and so it does when Aurora Miranda (sister of Carmen Miranda) shows up in her cookie-selling number Os Quindis de Iaiá — although it is a long way from what turned out be Who Framed Roger Rabbit nearly 40 years later

As the film continues, the animated sequences  begin getting even more LSD-inducing with more abstract and colorful sequences, giving a hilarious turn of Donald chasing women in Acapulco, as well as a sequence of Donald with dancing cactus with Carmen Molina. It’s awesome and just pure fun, even with the lack of a plot, as we focus in just getting into Latin America. If you were a Latin American kid, it felt great to see your culture, your language on screen in such fun trip — am I the only one that thinks this is pretty educational?

The last home release for The Three Caballeros was the Disney Gold Collection which included the French and Spanish dub (sadly in mono 2.0), as well as caption in English. It would be awesome if Disney would remaster the video and audio for a very special Bluray edition with a retrospective on the animation/live action technique, as well as a feature of Latin Americans on American entertainment, sequences on the three actresses in the film… and of course, the remastered French and Spanish dubs.