Cat in Paris, A 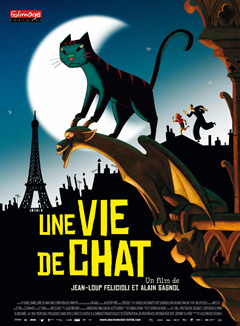 A Cat in Paris is a stylish animated film about a cat with a double life.

In the daytime, Dino the Cat catches lizards to give to her loving owner Zoe (Zani), a little girl who’s unable to speak from, what I guess is, the death of her father at the hands of Victor Costa (Benguigui), whom Zoe’s mother (Blanc) has been trying to catch ever since.

At night, Dino wanders around the neighborhood and ends up at Nico’s place, where he’s known simply as “The Cat”. Nico is a burglar — with an uncanny ability for Parkour [1] — who follows “The Cat” into other people’s homes and steals pricey artifacts for a living.

It’s when little Zoe decides to follow Dino into the night that she runs into her father’s killer, who’s planning a heist with his comedic goons. All through the night, Zoe must escape from the hands of Costa and his people with the help of her cat.

A Cat in Paris has a simple story. It’s dark, in the vein of old animated films like All Dogs Go to Heaven, in that Zoe is basically an orphan — her dad was killed and her mother is always busy, as she has her own inner demons she must face when she meets Costa. Our unlikely hero is also a burglar, very much like Charlie the Dog was a doggie gambler. But the main character — though he does nothing extraordinary — is”The Cat”. However, overall the story is a must-escape tale.

This really short film — it barely passes the 1hr. mark to classify as a feature length for the upcoming Academy Awards — begins with a simple title sequence reminiscent of Saul Bass or the simple catch-me sequence in the much-loved Catch Me If You Can set to Billie Holiday’s I Wished on the Moon, but the style of the film better resembles paintings of Picasso or Matisse — maybe a combination of both. One thing is certain, the film’s style makes it stand out from the hoards of stylish clean-cut CGI animated films of the last decade.

The film’s got enough humor to entertain younger viewers, but I have no idea if there will be a dub available. In any case, if children are growing up with subtitled animated films, my commendations. There is probably one or two scary moments in the ending chase sequence, and quite a bit of dark humor — I inappropriately laughed out loud in a particular scene involving a tiny dog and a brick.

However, as much as A Cat in Paris showcases style and entertainment, it’s pretty light fair. Though the ending is supposed to give us a sense of security and happiness because Zoe’s family is “complete” once again, it feels forced and untruthful. It was a nice film, but not a life-changing experience.