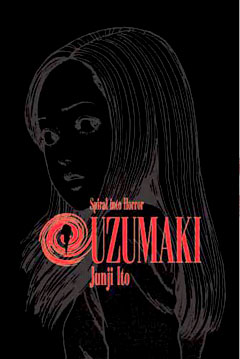 This is Kurouzu-Cho, where I grew up. I would like to share with you the strange events that took place here.

Welcome to the twisted world of Uzumaki — the Japanese word that means “spiral”. Created by Ito Junji, Uzumaki tells the warped tale of Kurouzu-Cho, a fictional town on Dragonfly Lake. This tasty little bit of nastiness lets audiences into a world where everything is ruled by the spiral. Our shy hostess is the lovely Kirie Goshima, a high school student living in Kurouzu-Cho. She tells us the story of the strange happenings that occurred in her small town — where modern homes and old shanties share the same amount of space.

Throughout this comic, we find just how twisted Ito-san is. His mind is like a Rubik’s Cube: no matter how many times you twist it, you never fully figure it out. He takes the readers’ minds and moulds them into something similar to the uzumaki for which the comic is based. From the tale of Kirie’s boyfriend, Shuichi, understanding the power of the spiral, to the death of his parents in the most bizarre and flesh-crawling manners, you can’t help but feel yourself being turned inside out, spine like a pretzel, hands like curled dough.

The illustrations delve even deeper into the amazingly freaky mind of Ito-san. It’s as if someone gave him permission to act out the most fascinating and disturbing images in his head — something fans of Ito-san’s work shouldn’t be at all surprised about (see Flesh-Colored Horror). But it’s his understanding of the art of the spiral that’s so intriguing.

Probably the most perverse rendering of obsession comes in the form of his illustration of Shuichi’s father’s death — his love of the spiral consumed him, giving him the power to somehow curl himself into a human spiral (from the inside out). Ito-san manages to give us an illustration that not only makes the feat seem possible, but he also tickles that part of our brains that could only imagine such horrors in nightmares.

There’s also the gut-wrenching transformation of the humans into snails — beginning with a spiral shell growing from the flesh, resulting in the skin becoming slime, mating rituals giving rise to flesh-forming eggs. The entire sequence is enough to make the cells itch.

But what’s most impressive is Ito-san’s storytelling. There’s a great deal of sensitivity taken with his characters and the reader is thrown headfirst into a town that beckons the spiral forth. The only disappointment, really, is how Kirie and Shuichi’s journey ends (I won’t ruin it for you, but it’s rather anti-climactic).