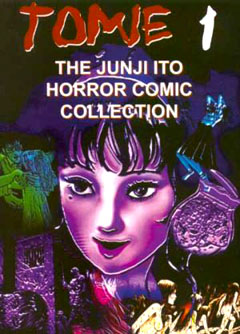 It’s no mistake that one of the seven deadly sins is lust. With so much beauty to behold, pining for those things that you can never have becomes all consuming. Such is the case with Ito Junji’s Tomie. It’s the twisted tale of a mysterious girl with powers that are as scary as she is gorgeous.

The story begins with a young girl named Reiko. While still in school, her best friend, Tomie, dies. What we learn after this point is both shocking and disgusting. Tomie suddenly returns to the school, alive and as beautiful as ever. It’s her beauty that drives the entire male population to the craziest affections. However, it’s Tomie’s love of a young teacher named Mr. Takagi that will drive them to murder. Takagi and Tomie’s love affair has gotten carried away, so much so that on a school trip Tomie flirtatiously admits to Takagi that she’s pregnant with his child. Suddenly, another classmate (one that Tomie recently rejected for Mr. Takagi) overhears the confession. This drives him to insanity. He loses his control and smacks her. She loses her footing and falls to her death down a hill. Rage, envy, and lust drive the students to chop Tomie’s body into tiny pieces to be scattered throughout Japan.

And with this, we find out just how disturbing humans can actually be when pushed to the limits of self-preservation. As every chapter unfolds, we find out more and more about the powers of evil that lie just underneath the gorgeous exterior of Tomie. She’s able to seduce with a simple glance, and on the lust of others, to regenerate herself — even going as far as to take over the body of anyone foolish enough to so much as touch her.

Tomie, Ito-san’s first manga, is one of the most shocking graphic novels ever created. It’s not only a study in the dangers of lust, it also uncovers the true nature of humanity and how, perhaps, the seven deadly sins are nothing more than a look at the ugliest and most distressing parts of human nature. Ito-san has managed to create a manga that not only exposes human frailty, but also takes it to an extreme that I don’t think had ever been seen before. It’s both blunt and literal, showing how two-faced Tomie is by literally showing her with two faces. When anyone dares capture Tomie’s persona on canvas or on film, they’re treated to both sides of her — one, the beautiful face that everyone adores and fears; the other, a talking tumour that entreats people to burn the rest of her body.

It’s this extreme look at the desperation of humanity that is both enlightening and frightening. On the one hand, Ito-san creates a commentary on the risks of obsession, how it can overtake you and create a thirst for murder that never dies. On the other hand, you have a piss-take on the ugliness of absolute beauty.