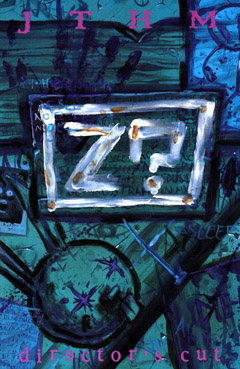 I can’t deny it. There’s something about psychopaths that just turns me on. They’re brilliant, yet crazy. Bloodthirsty, yet have clearly defined morals. Johnny, the Homicidal Maniac is no exception. His mind is like a blender: so many twisted ideas that keep spinning and chopping his brain into little bits. Until, one day, he finally goes completely over the rainbow and decides enough is enough!

Author and illustrator extraordinaire, Jhonen Vasquez is one of those artists that, perhaps, shouldn’t ever be allowed in public. His understanding of human nature is so deep, it’s frightening. But, his insight is so twisted that maybe it’s a little too real for most. With Johnny, the Homicidal Maniac, Vasquez shows the crazed and demented side of humanity.

Johnny loves the sound of his doorbell — whether he sees it that way or not. When someone dares to cross his lawn (complete with a sign that reads “RUN WHILE YOU CAN”) and ring his doorbell of death, what happens next may very well make you puke.

A trip into Johnny’s basement of bad things reveals medieval torture devices, miscellaneous body parts from visitors’ past, and a wall painted with human blood (to keep the monster behind it at bay, of course). After a session of screams and screeches, Johnny writes, “Dear Die-ary, today some friends came over.” It’s this warped sense of reality that made me fall in love with Johnny. He’s so desperately lonely, but he hates mixing with the dregs: skater boys, prom queens, burger mascots. They all disgust him. Until…

One night Johnny, who hates sleep (“I have better things to do”), decides to go into a quiet little house in his neighborhood. As he’s rummaging through the medicine cabinet in the bathroom, he hears the pitter-patter of nervous little feet. He slowly turns around and screeches, “Oh…hello. My name is Johnny, but you can call me ‘Nny’ for short. And who might you be?” Out comes a little peep, “Squee”. That’s when the sordid relationship between “Nny” and the little cutie known as “Squee” begins. He protects Squee as best as he can: giving him his brand of twisted advice — “I mean we can’t kill him. A kid needs a dad”; completely destroying bullies in a back alley, etc.

Nny develops a short lived relationship with a female, but that, of course, ends in dismemberment (though, he actually feels rather bad about that whole situation). But his most meaningful connection is definitely with Squee, whom he, basically, takes under his wing — sort of in a weird Big Brother kind of way.

Vasquez doesn’t leave his dementia to Nny, however. He also created a series of “Meanwhile” moments and side comics — “Happy Noodle Boy.” It’s these small touches that give JTHM life. Jhnonen’s a giggling freak of nature, a psychopath in a candy store. For all his madness, however, it’s his brilliance that makes me smile.