Dan Wells – I am Not a Serial Killer 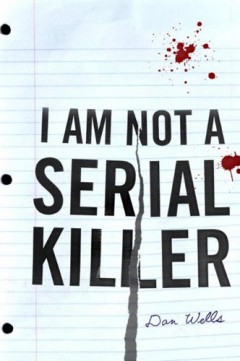 Book: I am Not a Serial Killer
Author: Dan Wells
Genre: Horror

John Wayne Cleaver is not a serial killer… but he’s obsessed with them. Plagued by sociopathic tendencies — a common trait among serial killers — he finds himself both fascinated by their history and worried he might follow in their footsteps. John lives by a strict set of rules in order to appear as normal as possible, though he has the occasional slip up. He lives a quiet life for a teenager, and chooses to help around his mother’s mortuary instead of getting into trouble. But everything changes when mutilated bodies show up at the mortuary, and John’s fixation pulls him into a dangerous hunt for a killer… and into a grisly world where not all people are what they seem.

In fact, some of them are the stuff of nightmares.

I am Not a Serial Killer is told through John’s point of view. A troubled kid from a broken home, John is a bit unreliable as a narrator, and leads us to believe he is an apathetic and dark person — even though he isn’t actually that bad of a kid. Throughout the story, he sheds his grisly persona and reveals a teenage boy who is uncertain about his life and his future — something from which we all suffer from time to time. Because of this, it’s easy to relate to John and even easier to root for him.

The book packs a supernatural twist that changes the overall tone of the novel. At the start of the adventure, we find John heading down a sinister, yet familiar, road — something reminiscent of Jeff Lindsay’s Dexter series. But the book jolts in another direction partway through, warping into something like an episode of Supernatural.  The lack of proper foreshadowing damages the believability of John’s situation, leaving the sudden change difficult to digest at first.

That being said, John takes us firmly by the arm and drags us deeper into his treacherous journey, refusing to let us go. We simply cannot leave John on his own. We learn from the main character that we can fight the monsters within ourselves, so long as we acknowledge they exist and resist the temptation to give in to them. John teaches us that we aren’t the only ones with inner demons to battle, too.

Dan Wells, the author of the John Cleaver books, illustrates vivid scenes without glamorizing his prose. The story is crisp and has wonderful pacing which kept me reading right to the end. I like to think of the author as a chef of words: the dish might seem simple, but his choice of seasonings gives the book a delicious flavor that leaves you hungering for another bite. Top it off with a hefty spoonful of dark humor, I am Not a Serial Killer is sure to satisfy your craving for a great read.