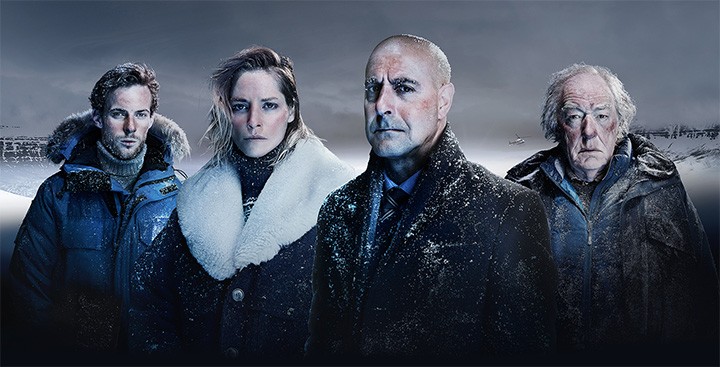 A man is mauled alive by a polar bear. Two children find a fossil while playing in the snow. From these two events, the mysteries and drama of Fortitude unfold. What may seem like just a bigger-budgeted hybrid of contemporary British and Scandinavian crime drama becomes more than a simple matter of who –or what– killed whom.

Fortitude sits on an island in the Arctic Ocean’s Svalbard archipelago, settled by humans for only one hundred years. There is no reported crime and no unemployment, but the population rate is falling. Boat traffic has stopped, and it can be difficult to arrange for a plane to or from the mainland. Governor Hildur Odegard (Sofie Gråbøl, of the original Forbrydelsen/The Killing) campaigns for a hotel carved in the ice of the island’s glacier. She hopes this project will bring investors and tourists to expand the economy beyond mining and scientific research.

In previous decades, the work of nature photographer Henry Tyson (Michael Gambon) generated much of the interest in the land and its wildlife. He is now ornery and suffering from cancer in a town where it is illegal to die or be buried, since the permafrost has preserved corpses still ridden with plague. The polar bears that brought Tyson his fame outnumber the people –three thousand bears to seven hundred citizens– and thus everyone, even the children, is advised to carry hunting rifles.

In the eighth episode, Tyson remarks,  “When I came to this place, the purity was bracing, unsullied, stark and fierce. Now it’s all got shat on, poisoned and polluted.” This icy terrain can appear to characters as a bespoiled wilderness, an exceptional site for specimens, a utopia of post-national relations and social welfare, or a town barely holding together against the elements. At times the setting evokes a Western on the Arctic frontier, complete with the conflict of preservation versus adaptation.  Fortitude’s genre-jumping extends from neo-noir procedural, with Elena Ledesma (Verónica Echegui) as a beguiling femme fatale, to small-town melodrama and gory sci-fi horror. Yet there is more to Elena, and more to the program, than can be captured in a simple description.

Unpredictable and conflicted sheriff Dan Anderssen (Richard Dormer) heads a police department with only a handful of officers such as Ingrid (Mia Jexen) and Petra (Alexandra Moen), capable in the field yet untested in homicide investigation. Even more, policemen Frank Sutter (Nicholas Pinnock) and Eric Odegard (Björn Hlynur Haraldsson) find their martial infidelities entwined with the crime. Series creator Simon Donald remarks: “You don’t get conventional cop behavior. You don’t get the incident tape and the 20 guys in white suits and all the photographers. You’ve lost all those reassuring crutches.” [1] Morton, who in other shows would be the crusading American hero, only arrives after the first episode. Despite being generally unflappable and extremely competent, his skills and attempts at adaptation do not prepare him for a case and place like this. His arrival is paralleled by that of young Vincent Rattrey (Luke Treadaway), sent to help scientist Natalie Yelburton (Sienna Guillory) study bizarre animal deaths. Meanwhile, enterprising and dangerous Yuri Lubimov (Emil Hostina), head of security in the only other major island settlement, the far-off Russian town Vukojebina. is working with researcher Max Cordero (Michael Obiora) to find a treasure beneath the ice. As the setting becomes a major factor in the drama, and a character in its own right, a theme develops: of nature –flora and fauna, emotional and physical– as both prey and predator.

It’s sometimes frustrating, for both positive tension and negative plot criticism, how Fortitude is slow and deliberate in withholding information about time and setting of certain events, revealing the wider context episodes later. The New Republic [1] elaborates on how this form of storytelling is carried out:

“Another way of putting this cinematic style of carelessly not-showing—or showing the things we don’t care about—is that there are aerial views aplenty but few establishing shots. We learn to recognize doors, sheds, dog kennels, and eventually—over time—certain interiors, but we have only the vaguest sense of where different residences are with respect to each other. Starved of the usual contextual input, we adapt. We learn to pick out locations and build meaning using other clues…Most of the art inside is of the nature outside: polar bears, icescapes.”

Exterior and interior meld, the familiar tropes of “Nordic noir” are made strange; and viewers, like the characters, must readjust to new and shifting environs.

Even critics like Scott Meslow of The Week have had to amend their evaluations, first calling the show just “another grim TV murder mystery” [1] only to follow up with “Binge-watch Fortitude before someone spoils it for you” [1]. One might wonder if the show had this same expectation-shattering quality when it was initially planned as a Starz co-production. [1] Though Fortitude may not be revolutionary in its writing of female characters, it does present many women who are never confined to a single plot or trait or group of interpersonal relations, like the wives Jules Sutter (Jessica Raine) and Trish Stoddart (Chipo Chung), or the abrasive Doctor Allerdyce (Phoebe Nicholls), head of the town’s limited non-research medical facilities. However, after seeing Jessica Gunning in Inside No. 9, I felt her role as the friendly and vulnerable Shirley Allerdyce was a little underused, as was that of Tavrani (Ramon Tikaram), a Sami man who practices taxidermy. The show’s flaws are often smoothed over by its bounty of character acting, including that of Darren Boyd as the strange schoolteacher Markus Houseklepp.

A wintry, evocative score by experimental composer Ben Frost compliments the Reyðafjörður-shot landscape. Here is a selection from the original music [1]. The soundtrack also includes a moody cover of Tainted Love [Soundcloud], its title very fitting for the relationships in the show. Fortitude is ultimately about the formation and variations of connection: from person to person, species to species, or living being to environment. “Come to me,” repeats the theme song Peeling Off the Layers by Wildbirds and Peacedrums [Bandcamp]. Within the show’s context, though, the refrain “water will keep running/rivers will turn” gains a new meaning. No matter what happens to the people on the show, nature will continue, in one form or another. Humanity is another short-lived, miniscule pest within the lifespan of the ice and ocean.

For a little more information on the song, visit The Leaf Label.