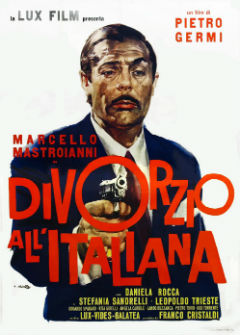 Pietro Germi was nominated for Best Director and shared the win for the Best Original Screenplay Academy Award with his co-writers for this masterful black comedy about impoverished Sicilian nobleman, day-dreamer and possibly soon-to-be murderer Ferdinando Cefalù (Mastroianni).

Ferdinando wants out of his marriage and comes up with a plan to kill his wife (Rocca) in a crime of passion, which amounts to just a little jail-time,  instead of divorcing her, which would mean excommunication from the  Catholic church. Why does he want to go to all this trouble, you ask? So he can marry his beautiful, much younger cousin Angela (Sandrelli).

Mastroianni received his first of three Academy Award nominations for Best Actor for his performance in this film. Not only did he never win, but surprisingly none of his work with acclaimed director Federico Fellini ever got nominated.

It could almost be said that this is a dual performance in that the film is essentially two films in one: Ferdinando’s daily reality and his various fantasies about killing his wife. It should be emphasized that it is “his” reality as the entire film is narrated by him from a little further in the future and Ferdinando is most definitely what we call an unreliable narrator.

This explains some complaints often made about the film: the wife is too annoying, the girl is too sweet and devoted, etc. Well, of course they are! That’s the genius of the unreliable narrator device; you, the viewer, see what Ferdinando, the character, saw and how he saw it. There is no unbiased view of the situation here.

Well, not until the very last scene, when we’re at the point from which Ferdinando has been narrating the story. Once the film has caught up with its narrator, it leaves his perspective and the very last shot gives us a glimpse of its true reality. And boy is it an ending for the ages.