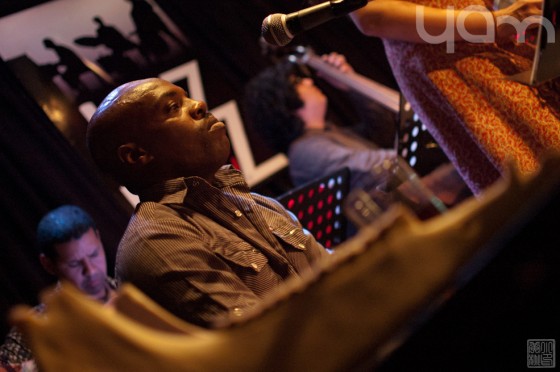 Last night, Amy and I had the opportunity to attend Gabriel Alegria’s Afro-Peruvian Sextet’s second performance entitled En las 5 Esquinas del Jazz Afro-Peruano. The Miraflores Jazz Zone was packed with an older crowd, including Eva Ayllon herself — no boos this time around. Everybody ended up enjoying the splendid blend of Afro-Peruvian jazz sounds that the band displayed.

Shortly after the intro song, the band performed new songs from the band’s upcoming third studio album. In between songs, Gabriel Alegría began talking about their inspirations for some of the songs. Personally, I found them pretty interesting — who would have thought that the old D’Onofrio Sublime packaging could be the inspiration of a song?

The audience were amused at the Sublime reference for La Esquina del Pensamiento, showing their true age as well as their love for the chocolate. Audrey Hepburn’s rendition of Moon River in Breakfast at Tiffany’s also served as inspiration, while comtemporary jazz and a donkey’s jaw inspired the creation for Karachacha.

I enjoyed the concert, great musicians and the Jazz Zone is a nice location for listening to jazz live. The only problem the concert had was the photographers — not Amy, she’s a ninja — covering the concert; most of them were blocking the stage. For a moment, I actually thought one of them was working that camera, creeping on the band from a very close distance. What a petty visual distraction, yet it didn’t took away from the band’s sound.

Overall, very good concert. The band will be touring around the USA in April.