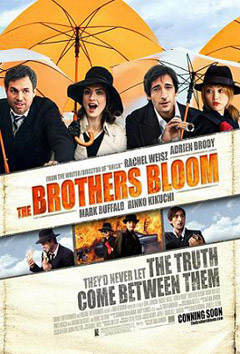 The Brothers Bloom is a one of the funniest, most compelling movies I’ve seen this year.

The story chronicles the youthful delinquency and strange adulthood of Stephen and Bloom (who, apparently, has no first name) and brings us to the present day where the younger wants to leave the business.

Why? He wants to have a real life not scripted by Stephen, a literary inspired con man who does not have an event in their lives not scripted by himself. Bloom is depressed and longs to love and be loved without pretense or motive in some elaborate scheme. The elder convinces Bloom to pull one more heist, his modus operandi being, “the perfect con is the one where everyone gets what they want in the end“.

The target is the heiress Penelope, an isolationist whose hobbies include… other people’s hobbies. This has led her to become an eccentric polymath who has never dealt with any kind of real world situation, much less love. It makes her a vulnerable mark to Bloom’s quiet charms.

In Stephen’s elaborate scheme, Bloom convinces Penelope to engage in a round the world adventure to fill the con’s pockets, but is that all Stephen has planned? One of the most charming things about this movie is the infusion of smart dialogue and impossible situations in a story very much influenced by literary magical realism, moved along by utterly bizarre characters. It’s a smart and funny viewing that doesn’t talk down to an audience; it may even bring you up a bit after brain dead fare such as Terminator Salvation.