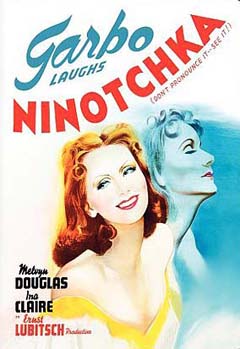 Greta Garbo only ever made that one comedy in her short filmography, often known for her smoldering roles, MGM made a huge deal out of this one. The whole promotion of the film centered in that one scene in which Greta Garbo just laughs, selling Ninotchka with the slogan “Garbo Laughs.” And boy, she did.

Ninotchka tells the story of three comrades that have arrived to Paris to sell the jewels of Countess Swana (Claire), which were confiscated by the Russian government. The three comrades, Iranoff (Ruman), Buljanoff (Bressart) and Kopalski (Granach) live the grand life of a capitalist renting the royal suite at their hotel, until comrade Ninotchka (Garbo) is sent to check on them.

Ninotchka is all business, dry and to the point. She doesn’t understand our capitalist way of living, smoking cigarettes until we drop dead, and wearing silly hats. It is on her way to study extraordinary structural achievements — the Eiffel Tower — that she meets Leon (Douglas), aka. Count d’Algout.

Garbo’s performance as a hardcore communist is quite exaggerated — disregarding your left or right political point of views — she flirts with Algout saying things like “your cornea is excellent” and “you’d be an interesting subject to study,” and the whole thing plays with Ninotchka saying the most dry things and making them very sexual — or maybe that’s just my dirty mind playing games. In the context of the film, she’s hard to get, a challenge, and Algout wants her… she talks weird, and he likes that.

Once Ninotchka loosens herself up, Garbo is set free and is quite hilarious. Her laugh is contagious and works surprisingly well. The scene in which she gets drunk at a party is one to note for, because she apparently was embarrassed to shoot such a scene. Let’s face it, by now, we’ve seen much MUCH worse drunk women on the screen that Garbo’s is just sweet and quite a cute drunk.

However, unlike The Women, Ninotchka might not just be everyone’s cup of tea. It’s a little slow at times, especially if you’re not already a fan of Greta Garbo. If I had to start a newbie on anything Garbo, I would probably show them Queen Christina… but that’s another tale.