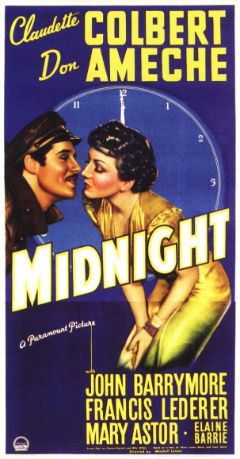 Before becoming one of Hollywood’s most acclaimed directors, Billy Wilder was solely a screenwriter, working with partner Charles Brackett, with whom Wilder continued to write when he became a director as well.

In 1939, Wilder and Brackett (along with two others) co-wrote the Best Picture nominated Ninotchka (starring Greta Garbo), but they also wrote this charming romantic, borderline screwball comedy.

The film begins with Eve Peabody (Colbert), an out-of-work American showgirl who has just arrived in Paris from Monte Carlo. It’s raining outside and all she has is the clothes on her back, so she hops in a cab. Tibor Czerny (Ameche), a Hungarian taxi driver gives her a lift, tries to help her get a job, buys her dinner and even offers to let her stay with him that night. Eve refuses, and cons her way into a concert held by socialite Stephanie (Hopper).

Introducing herself as Mrs. Czerny, Eve finds herself in the middle of a game of bridge with Marcel (O’Malley), Madame Helene Flammarion (Astor) and Jacques Picot (Lederer). Helene’s whealthy husband Georges Flammarion (Barrymore) seems to recognize Eve and calls her the wife of Baron Czerny, a charade the two will continue to play out for the remainder of the film. Ameche’s Tibor, concerned for the penniless Eve, tries to track her down and winds up in the middle of the charade. Hilarity, farce, a weekend in the country and a trip to the divorce court ensues.

This film is just as fun and quick-witted as anything we’ve come to expect from a Wilder/Brackett screenplay. Colbert and Ameche have amazing chemistry together. John Barrymore is playful, a refreshing change of pace for the actor. Like any screwball comedy, most of the situations the characters find themselves in are completely ridiculous and improbably; but that’s part of fun. The deeper a hole Eve digs for herself, the more rewarding the eventual happy ending becomes. This is cinema as escapism at its finest.