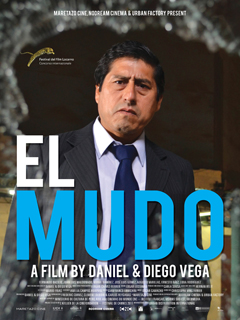 Our enjoyment of comedy is so culturally ingrained that everyone likes different types of humor, just as it is in food, some people like it spicy, others go for salty or sweets… then there are those who like bizarre tastes.

When the first trailer for the Vega brothers’ sophomore film came out [1], I was actually sort of excited about the project- a first in terms of Peruvian cinema, for sure. Often described as a “dark comedy” about a righteous judge that someone is trying to kill, the prospect of endless laughs was a possibility. I love dark comedies, but deadpan comedy is often hit or miss for me.

El Mudo tells the story of Judge Constantino Zegarra (Bacilio), a righteous public servant that hasn’t bent the law or his path through it to accommodate the street smart idiosyncrasy of Peruvian (or Limeño) society. In fact, he’s so hellbent on doing a proper job that he’s burned some of the social bridges he’s managed due to his father’s connections in the system, and he has -of course- pissed off many along the way.

During a drive home, he’s hit by a bullet that renders him mute due to a tracheotomy, leaving him obsessing over who is trying to kill him.

The Vega brothers have managed to capture the lives of a middle-class family, who may not be swimming in cash, but aren’t necessarily living on a day by day budget. When Constantino is dismissed and transferred to smaller region, there are some casual talks on how the family’s income may be affected, but his mind never wanders off… his goal is clear- Constantino will find the culprit of his ailment even if that means using alternative measures, and Bacilio’s performance more than makes up for the lack of punch in some of the jokes.

The script skates a fine line between a light drama and comedy, though the laughs are just a handful and they never reach the highs of a really good one for you to fully unwind, they give El Mudo a certain flare that I haven’t seen in Peruvian films of the past 25 years. The feelings explored never get to extremes, very much like local weather, as well as other deadpan comedies made between Europe and other Latin American countries.

Performances are good, but the highlight of El Mudo has to be the camera that paints a side of Lima — that of old downtown and its surroundings — seldom pictured on film that has often swayed between the outskirts of the city to the world of the elites. Crooked judges who have lunch together at a Chifa (those Chinese restaurants so ingrained in Peru that you can only find them here), down on their luck (and sometimes crooked) cops who ask for money because the state’s budget is never enough for them to make a living, our seemingly acceptance of this not-always-lawful way of living- they’re all part of our day to day, and now caught on camera (and never actually exaggerated) for all to see.

Though I was expecting more from it, I enjoyed it a lot more than I did Octubre.