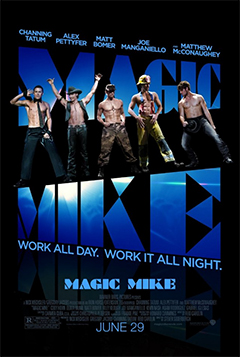 Admit it, you’ve thought about going to a strip club at least once. Who wouldn’t want the man or woman of their dreams taking their clothes off and treating them to a show?  In most cases, the male moviegoing audience gets their way, being treated to hundreds of flicks with women taking their tops and bottoms off through the male gaze.

In comes Steven Soderbergh, turning the tables in the best of ways and providing the world with a chance to indulge their female gaze with Magic Mike. Forget Michael Bay and his sexist trash this summer. It’s time for us to objectify some men at the movies!

In case it wasn’t obvious enough by now, Magic Mike is a movie about male strippers. Channing Tatum plays Magic Mike, an entrepreneur of sorts who dabbles in as many businesses as possible — including stripping — all to sell his own custom furniture someday. Along the way he stumbles upon Adam, a down-on-his-luck nineteen year old who he takes on as a protégé of sorts in the stripping world. As the film unfolds, Mike finds himself falling for Adam’s sister, while Adam embraces the sex, drugs, and cash-filled lifestyle that comes with stripping.

Magic Mike might seem like it’s all about stripping, but there’s considerably less of it than you might expect. The film instead focuses on Mike and Adam’s lives, offering a glimpse at two very different paths that these strippers might choose to take. This doesn’t mean that it isn’t full of men dropping their trousers to bounce their asses for salivating audience members because, trust me, it does.

Soderbergh’s direction is as impressive as usual, reminding one a lot of his work on Contagion in terms of its looks. As is traditional for many of his films, the color filters are extremely noticeable in practically every scene, using some soft blue tones and a lot of strong, sunny yellows. The pacing, much like his last film Haywire, bounces between heart-pumping entertainment one minute and slow and steady conversation the next. It gives the film a slightly disjointed feel that really isn’t bothersome until the last act where things fall somewhat flat.

While I’ve never cared for Channing Tatum much, I must admit that he doesn’t do half-bad in this, which isn’t as much of a surprise as it might seem after some decent work in Haywire and 21 Jump Street. Yet again, Soderbergh strikes with his knack for bringing out the best in his actors. Whether it’s porn star Sasha Grey, a slowly declining Julia Roberts, mixed martial arts fighter Gina Carano, or even Jennifer Lopez in her early acting days, Soderbergh manages to make each of them shine in their own unique way. Hell, he even knew to kill off Gwyneth Paltrow within fifteen minutes of Contagion and that’s probably the most intelligent use of her I’ve ever seen.

The supporting cast is nothing more than average, flaunting a cast of men that most women would drool over. Above all else, and the biggest surprise to me, was Matthew McConaughey, who dishes out what I’d consider his best performance in over a decade. As for the ladies, Cody Horn and Olivia Munn don’t really do much more than deliver their lines competently.

What really makes Magic Mike stand out amongst other movies this summer, regardless of its average story and acting, is just how much fun it is. Even in its most awkward moments outside of the strip club, Magic Mike has something pumping through its veins that really keeps you entertained and the impressive dance sequences are accompanied by an engaging soundtrack selection.

Maybe it’s your very first time being treated to half-naked men removing their clothes or maybe this is just a great reminder of how your last few strip club experiences went. Regardless of which of these might be the case, Magic Mike is definitely an experience worth taking a chance on.