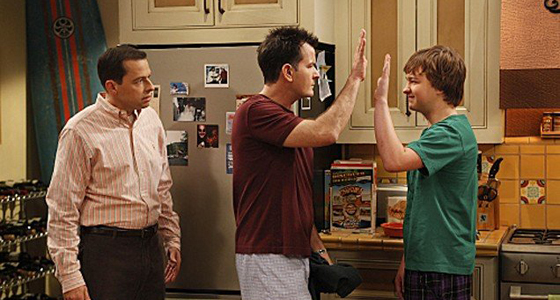 Season 8 of Two and a Half Men will be the last time you’ll ever see Charlie Sheen on any CBS show.

In Season 8, Alan (Jon Cryer) finally moves out of his brother’s house and goes to live with Lyndsey (Courtney Thorne-Smith). But that doesn’t last long thanks to Alan burning her house down. They move in to Charlie’s for some time again. Despite her house being destroyed, Courtney continues her relationship with Alan.

Meanwhile, Charlie is broken down thanks to his break-up with Chelsea from Season 7. How does he solve his problems? He gets into relationships with other women such as Michelle (Liz Vassey) and Courtney (Jenny McCarthy), who returns to the show after her arrest during Season 5. And just when Charlie was going to settle down with Michelle, his long-time neighbor stalker Rose (Melanie Lynskey) re-appears and announces that she’s getting married, making Charlie finally realize that Rose was the one person that always cared for him and he falls in love with her.

What about Jake? He spends most of the season with Eldrige (Graham Patrick Martin), his best friend from school. They get along very well, but Alan banging Eldrige’s mom strains the friendship between the boys at times.

Sure, recapping Season 8 of Men — the shortest season in its history at 16 episodes — is totally pointless. The feud between Charlie Sheen and CBS and Chuck Lorre not only overshadowed Men by a long shot, but it was also far more interesting and even affected the show. Seriously, you could watch half of the season (or less) and still claim that you watched the entire season.

There are some good moments in Men thanks to pretty good performances from Melanie Lynskey, Holland Taylor and Jon Cryer. The latter carried the show eariler during the show and had a funny performance in the final two episodes where he gets to play an evil version of Alan, who is totally the opposite of what Alan stands for. As for Lynskey, she plays off well against Sheen in her guest appearances and still makes Rose look funny and sweet. Holland Taylor, despite the little screentime she gets, still shines as the evil mother of Charlie and Alan. You end up wishing that Lynskey and Taylor had more screentime along with Conchata Ferrell and Ryan Stiles, who is stuck playing Judith’s (Marin Hinkle) husband, Herb.

Yet, the show still suffers from repetitive and hit-and-miss jokes, Charlie Sheen being in bad shape — worse in the final three episodes of the season — Berta (Conchata Ferrell) and Evelyn Harper (Holland Taylor) not being used with more frequence, Jake Harper suffering from lack of good material as well as Angus T. Jones reaching adulthood and making Jake look like a bumbling idiot. And those problems were happening for at least three or four years, which doesn’t say good things for Men at all. Season 8 is better than Season 7, but that’s not saying much.

The people in charge of producing the show got lucky that the ending of the 16th episode served well as a season finale and allows Men to enter a 9th season — set to begin on September 19, 2011 — with many ways to dispatch Sheen’s character. It’s sad that the fans of Men won’t get to see a proper conclusion to the storyline arc between Charlie and Rose, it had potential to be one of the best things for the show in years.

With Sheen gone, CBS could have vouched for Jon Cryer as the show’s lead actor as I said months ago. But they’re going with Ashton Kutcher instead and aiming for one of the biggest jump the shark moments in television history. #thanksashton