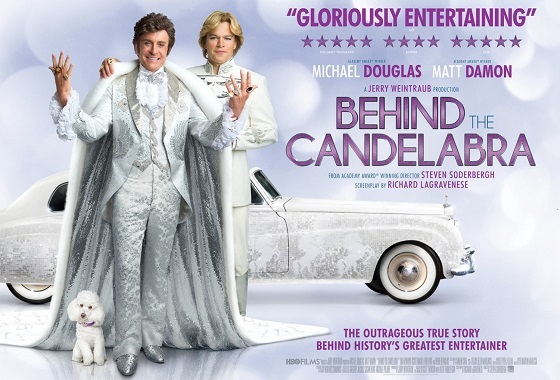 Just when you thought the movies couldn’t get any gayer, Steven Soderbergh hits us with a TV movie that really tops the chart. Donna Summer’s I Feel Love leads us right into a gay bar in the seventies, introducing us to Scott Thorson (Damon), the man who would soon fall in love with Liberace (Douglas).

At its heart, Behind the Candelabra is a simple love story told in an incredibly grandiose setting. When introduced, Scott is a naive, young man who heads off to Las Vegas with a friend to see Liberace in concert. When they arrive at the show, he’s already playing Boogie Woogie on the piano. The audience is riled up and in turn we’re just as excited about the delightful performance going on. It’s that energy and charisma that makes Liberace such an appealing character for both Scott and us, and Douglas plays the role perfectly. “I love to give people a good time,” he says to Scott, and boy is he right.

Steven Soderbergh loves to give people as much of a good time as Liberace does and it’s clear here. For all the times it feels like the TV movie it is, it makes up for it tenfold because of Soderbergh’s style. It’s familiar enough, with lavish sets and long takes abound, but there’s something special about it: it’s as queer as it gets. Sometimes it’s campy and flamboyant with showy musical numbers, while other times it’s just as sexual and even unsettling as something like Fassbinder’s Querelle, which Soderbergh’s prevalent yellow filter echoes nicely at times.

There’s a beautiful intimacy to the way the story of Scott and Liberace is told. It’s in great part thanks to Richard LaGravenese’s very successful collaboration with the director, which is stronger than anything he’s done in over a decade, especially in the often humorous and sharp dialogue. He only falters when he tries to push in some not-so-subtle social commentary about gay marriage and divorce, where the pacing gets a little iffy. It’s barely an offense, though, considering how well he develops their tempestuous relationship.

Everything in the Behind the Candelabra has that sort of unhinged passion, though, be it Soderbergh’s style, LaGravenese’s dialogue, or the actors’ performances. Michael Douglas stays in character through and through, with excellent make-up and costume work helping to constantly change his appearance. Outside of Damon, all others pale in comparison; even Lowe as a plastic surgeon who looks straight out of a horror movie. He always looks like he’s enjoying himself as much as we are, and that’s important when you’ve got a big personality like Liberace in your hands.

Best of all, however, is how genuine their relationship feels. In a world where most gay characters played by straight men feel uncomfortably fake, it’s refreshing to see two actors embrace their roles wholeheartedly, giving the story a heart and soul it deserves. However strange their relationship seemed at times, it’s heartbreaking to watch Scott fall apart, destroying their bedroom to one of Chopin’s piano pieces. That touch of reality is one of many things that make this more than the camp mess it could have been.

A few months ago I reviewed Side Effects as though it was Soderbergh’s last before retirement, expecting this to be just your average TV movie that I could shrug aside. As Liberace says in the last scene of Behind the Candelabra, “Too much of a good thing is wonderful.” Steven Soderbergh has given the world an abundance of great things, and I’m glad to say that this, his final film, is just plain wonderful.