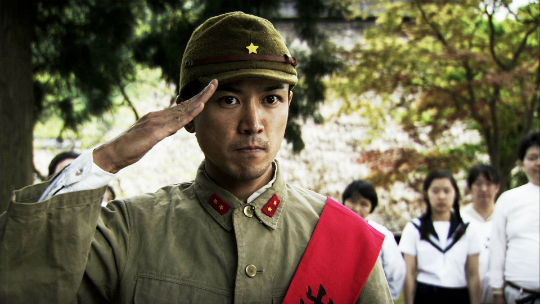 Let me first say that I didn’t have an intention to watch this movie. My editor made me watch it because she’s a really big fan of Shinobu Terajima-san. But I’m really happy that I watched it because I was blown away with how amazing it is.

First off, Onishi-san, you’re not really well-known outside of Japan and it was hard to find any information about you so if you could introduce yourself?

Everything, your birthday, how you got into acting.

How did you get into acting?

In the beginning I was working in the music industry. Afterwards I started working in the movie industry, but backstage. Slowly I started learning how it works. I was kind of admiring the business and  how the industry works as a whole. And then I started dreaming off the stage.

So, you went the back way into the industry.

Could you explain what about this part made you decide to play it?

When I first got the script I was very nervous because of how different the role was. Since it’s very heavy and I felt it could be very, very hard to prepare for. But I understood how important the role is and that’s why I chose to play it.

I tried my best not to act like a cripple. Because the character wasn’t born as a cripple but became one. I wanted to keep this sort of natural, so I didn’t think myself as crippled. I wanted to create the allure of the man in that society (1940’s Japan), where it was very chauvinist and prideful, and he has this… he has so much pride but he lost all of it because of being handicapped. I tried to reflect on how he was before, it wasn’t so much about him being handicapped, it was more his pride as a man.

That leads to my second question, what kind of preparations did you do for this character?

It was very difficult to prepare for it. I felt the gap between the different generations because I have never experienced a war. I started doing research on WWII and in doing so I was able to understand some of it.  Like in the movie, there’s this one scene in where the character is looking and worshipping the newspaper article about his heroic actions. I found this idea that you have to stick to the…. how do you say it…

Stick to the pride of the society? The society norms perhaps?

No, the Japanese society at that time kept saying things like, “this is the right way”,  to worship and glorify the war itself. So he (the character) gradually starts understanding that this is not the right thing to do. But he was so brainwashed he didn’t think about it.

Well I guess that back in those days, I mean, I understand that the Japanese people were really prideful. I believe from what I’ve seen and read about your history, that back then society was everything.  You were not your own but you belong to everybody.

The pride during the great Japanese empire is nothing compared to the one today.  They used schoolbooks as to brainwash the youth. They created this formal pride. Our generation, in today’s Japan, we don’t have the feelings that are portrayed in the movie. But there’s still some, how do we say it, the Japanese looked down on the Chinese people back then. That still lingers with the older generation, they still have this superiority but not as much as it used to be before.

I also think that the meaning of the movie is to let the younger generation get to know the guilt of what Japan did during the war.

Considering the heavy nature of the movie and considering it is based on a banned novel, what are the expectations of the movie in Japan? Has it received criticism?

In Japan the audience was either approving or disapproving and that is probably the reason why the movie was created. People have to discuss about it and there is no neutral stance, it is either for or against. Most of the Japanese people felt uncomfortable or they were very critical towards the movie, but that was the real aim and intention of the director.

I see that our time is up. Thank you so much for the interview.