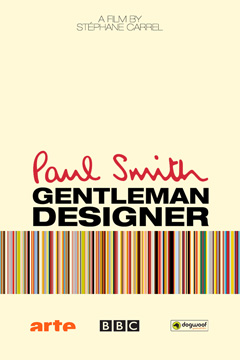 Who exactly is Paul Smith? For those not in the know, Smith is a British fashion designer who’s built his brand on the idea of “maximizing Britishness.” We’ve often heard the term “British humor“, “British fashion.” It seems the British have a secret world that only they can understand, something that we can only glare at from the outside.

Carrel’s 50-minute short documentary certainly makes you feel that way at times. Not knowing Paul Smith wasn’t much of a challenge when beginning to watch, but for fashion-impaired people, it may sound like a lot of talk that goes over your head, with talks of fabrics, buttons, cuts, etc. However, there’s great insight into Smith’s work ethic… and a bit of his creative process, which will definitely spark the interest of people in the nitty gritty part of fashion.

Britain has been the modern cradle of music, pop culture and fashion, as we’ve recently noted. Name any modern rock star, hit song, fashion designer or model… chances are they are British and proud of it. Heck, Madonna wants to be British. Paul Smith seems like the all-British bloke, making his way into the hectic world of regular working people and founding his profession designing menswear. He doesn’t like to call himself a designer, because he doesn’t really feel like one — he’s empiric, he learned everything he does now on the go, and has been perfecting his brand with the just-enough, off-beat menswear combined with fresh marketing and non-traditional handsome models.

Paul Smith, Gentleman Designer does great for Smith’s image as Carrel paints him as extra down-to-earth. Despite his success (being knighted in 2000, his boutiques around the world, the amount of rock stars that worship his clothing), his ego seems nonexistent and he seems like one of the guys when he’s interacting with the people that work with him on a regular basis. If he’s making 400 million GBP a year, you’ll never noticed, but you’ll never wonder how. He’s the epitome of the phrase “hard work,” and he doesn’t complain about it.

Though the short lacks that hint of glam that anyone would expect from a documentary centered in a fashion-related subject, it seems to fit Paul Smith’s style and spirit — just look at his office! However, the most interesting contrast I found was how different Paul Smith in London was compared to Paul Smith in Tokyo. Part of me wanted to know more about the behind the scenes of the cultural crossover, but overall it was a very complete look at Smith’s beginnings and development through the decades.

People say Smith’s designs are traditional with a hint of individuality, but in reality his work seems about individuality with that hint of tradition. Now, if only I could afford that…

Paul Smith, Gentleman Designer is available for UK and Ireland residents thanks to Dogwoof. You can check their online shop for details.