Tales of the Waria 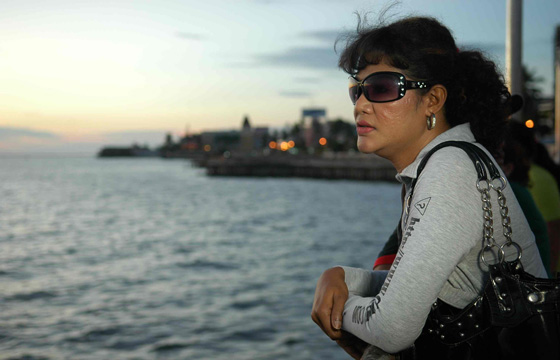 What better way to learn about LGBT issues around the world than to watch a short documentary about the third gender in Indonesia. “Waria,” as they’re known, pose an interesting contrast to traditional Indonesian culture, the world’s largest Muslim country.

The most fascinating aspect of the Muslim Indonesian view on “the third gender“, as well as gender reassignment, is how different it was to the view of these issues in Iran, as seen in the documentary Be Like Others. Whereas Islam officials there think that sex reassignment is as natural as “turning wheat into flour,” these warias state they want to return to God as men.

Tales of the Waria showcases a snippet in the life of the third gender. While Mami Ria struggles with aging and the disinterest of her man, Tiara struggles with the memories of a long-lasting relationship, and Suharni is trying to look for a better future. The most insightful sequences in this documentary are the ones focusing on some of the family members — in the case of Tiara, the relationship with her mother, who doesn’t really like her being a waria, but still loves Tiara because she’s her son.

The most heartbreaking story for me was Firman’s. I will defend your right to choose whether you feel the need to live as who you are or who you want to be, but it is in Firman’s way of speaking that you feel the most regrets. Not only from him, but also his wife.

Tales of the Waria is just a brief look into the subject of the third gender, but it’s got some beautiful photography — especially in the B-Roll, where you see most of the landscape shots — that enhances the stories of these people who seem to be at a very interesting cultural and religious crossroad.

Don’t miss out this stunning set of waria photographs by Diego Verges.