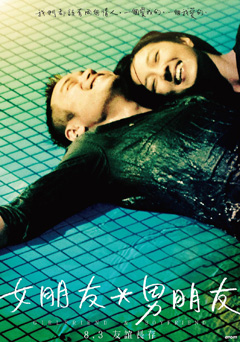 Let’s start this off with a confession: I ugly cried to this. I’m talking about sobbing, tears, and little whimpers at four in the morning when the movie finished its run and the credits were rolling.

Of course, starting out I was a little skeptical. A movie titled “Girlfriend & Boyfriend” must be a sappy romantic comedy not to be taken seriously, right? One in which the girl gets the guy, especially if said girl is Taiwan’s brightest new actress, Kwai Lunmei, who coincidentally won Best Actress for this film at this year’s Golden Horse Awards, celebrating the highlights of Taiwanese cinema. The posters and promotional material didn’t help my skepticism, but boy was I surprised.

The beginning of Gf*Bf is set against a rich political backdrop in the late 80s and early 90s, when martial law in Taiwan is finally lifted after more than 38 years in place. However, this political setting isn’t part of the core of the film — think of it as last year’s Sunny — but it aids to paint our characters and gives them strong traits that present them as real people. We know what they stand for and how they deal with their personal problems, eventually we all see them grow up and it all makes sense in a way that regular audiences identify with these characters as people. The success of the film stems from the fact that the Taiwanese movie-going audience connected with these characters, similar to how they made You Are the Apple of my Eye a hit last year.

Following best friends forever Mabel (Kwai), Liam (Chang) and Aaron (Vaughan), three rebel youths who spend their — quite fun — days pestering authorities at school, causing student dance uprisings and running naked across the campus. Yeah, life couldn’t be better for the trio, if it weren’t for Mabel’s unrequited love for Liam and Aaron’s unrequited love for Mabel. The rest is best exemplified by its tagline:

Everyone should have two lovers; one who loves you, and one whom you love.

The film deals with Liam’s inability to love Mabel the way she wants him to and Mabel’s need to be loved so much that she ultimately accepts Aaron’s love in place of Liam’s. It’s devastating the way this friendship dissolves as Taiwan begins developing into the nation it became, and Mabel and Liam are unable to let go and move on with their lives until it’s too late. They’re both destroyed people three quarters into the film, and it’s devastating once they reached that empty pool.

Worldwide, critically acclaimed filmmakers oftentimes struggle with local audience commercial appeal — Hou Hsiao-Hsien, Hirokazu Koreeda, Kim Ki-Duk, and many Peruvian films come to mind [1] — yet, Taiwan’s newest generation of filmmakers seems to be doing okay commercially at home, while being welcomed lukewarmly by most foreign outlets. In Gf*Bf, the balance is perfect to not be overwhelmingly art house and inaccessible, but with enough artistic view to accompany all that heart. Both leads, Kwai Lunmei and Joseph Chang, do a superb job portraying the struggles of their characters, and their relationship does make up what I thought was the best aspect of the story.

Of course, there will be people who will dislike the mushy melodramatic tellings of what could have been a politically charged film, but this isn’t really the place for politics, despite its setting. Gf*Bf was portraying an era for people, and it did just fine. This is definitely going to the physical buys collection.

You can get the movie on Taiwan DVD, Hong Kong DVD, or Hong Kong Bluray with English subtitles on YesAsia.