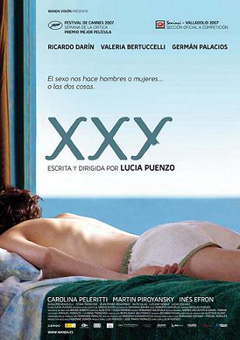 XXY, whose title is a reference to Klinefelter’s syndrome, tells the story of Alex (Efron), a intersexed 15-year old who lives at a fishing village in Piriápolis, Uruguay with her parents Kraken (Darín) and Suli (Bertuccelli), who have to cope with the challenges of her medical condition. Alex was born with both reproductive organs and wasn’t operated at birth, but Alex takes corticoids to supress masculine features, avoid breast reduction and is raised as a girl. But lately, Alex has stopped taking the medicine.

One day, Alex’s mother invites a couple (Palacios & Peleretti) and their 15-year old son Alvaro (Piroyansky) to spend the weekend at their house. Unbeknowest to Kraken and Alex, Alvaro’s father is a plastic surgeon who accepted the invitation due to his interest in Alex. But the inevitable attraction between Alex and Alvaro leads to what Alex’s parents would fear the most.

Based on the book Cinismo written by Sergio Bizzio, XXY deals with Alex’s struggle of living as an hermaphrodite, the aftermath of her sexual experience as well as having to make a life-changing decision in regards to her condition. Alex is viewed as a freak by the town’s habitants and because of this, her parents isolate her from most people. The only exceptions to this are two of Alex’s friends, Roberta (Salinas) and Vando (Nóbile). For some odd reason, it is never addressed in specific detail why Alex punched Vando’s face earlier in the film, but one would have to assume it was obviously related to her medical condition.

The best part about XXY is how Lucía Puenzo, who serves as the director and screenwriter, handles a delicate issue seriously and it translates well on the screen with sensitivity, poignancy and doesn’t come across as exploitative. Inés Efron blends very well with the direction that is intended for the film and fits well for the main character. Efron, along with Darín and Piroyansky are the best among the cast. Darín, who is regarded as one of Argentina’s best actors, did a nice job in making Kraken learning how to accept and embrace Alex, regardless of her condition. And Piroyansky portrays well how Alvaro is confused about his sexual orientation after having sex with Alex.

Recomendable to watch because there aren’t many films similar to this one that explores intergender people as a coming-of-age tale.