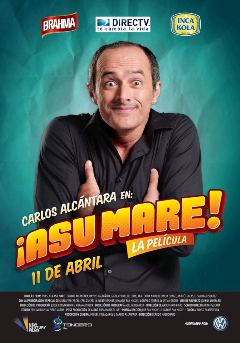 I never thought I would live to see the day in which a Peruvian film is highly anticipated more than any Hollywood blockbuster film after 1999’s Pantaleón y las Visitadoras. From a patriotic standpoint, that actually sounds nice.

Over the years, Carlos Alcántara has gotten more popular after his days as Machín from Pataclaun and thanks to his charisma and eyesight regarding this country, he’s going down in history as the person responsible for the most successful Peruvian film of all-time in the local box-office.

For those who don’t know about ¡Asu Mare! La Película, let’s start by talking about its origins: the film is based on Alcántara’s stand-up comedy show ¡Asu Mare!, which ran successfully for 4 years and later ended up being adapted it into a biographical film that shows his stand-up comedy routine bits along with flashbacks of his childhood, adolescence and adulthood as well as his relationship with his mother (Ponce de León as the younger version; Natteri as the adult version), whom he credits as the reason of his current success.

The premise is indeed simple, but for the most part ¡Asu Mare! La Película works as a nostalgia film as we get to see the 70s and 80s of Lima through Carlos “Cachín” Alcántara’s eyes as a kid (Castañeda), then as an teenager (Suárez) and later as an adult (Alcántara himself). In the film, Cachín wanted to be an artist since after he got his first taste of being on live television through a tv show. However, he had to go through plenty of obstacles in life before achieving his goal.

¡Asu Mare! is undeniably a well-shot film and this is thanks to Ricardo Maldonado, best known as the director of the Peru Nebraska ad. [1] Despite the $700k budget, which is tiny for a Hollywood film, Maldonado crafted a well-shot film that has a strong 70s/80s nostalgia feel thanks to its visuals and the music used in it. I wished he could have done a better job in regards to the transitions between Cachín’s life and the stand-up comedy scenes, because it was problematic to see the film jumping into Alcántara’s stand-up (the jokes aren’t new for those bits) just when the flashback scenes were getting really interesting to watch. That was more problematic to me than say, the film’s use of humor and a few scenes that I wish were more explicit [see: Cachín’s drug-addiction] just to add a stronger impact to the film.

As far as the performances goes, most of the performances were okay, but Alcántara was good at playing his old self and Ana Cecilia Natteri was really great as Cachin’s mom, which bring back memories of the worrisome Peruvian (and Latina) mother. ¡Asu Mare! also boasts cameos from the Pataclaun cast, but most of them were forgettable to me except for Carlos Carlín, whose cameo served nicely as a powerful blow to Cachín’s acting dreams.

I really wish I could have fully embraced ¡Asu Mare! just like almost everyone in the cinema did. However, I can blame myself on this front since I’m not part of  the film’s target audience at all and my relationship with “peruvian humor” hasn’t been good for the last 7-10 years at all. I still managed to have a good amount of laughs and enjoyed ¡Asu Mare! for what it is — I really loved the visuals and the nostalgic feeling — despite the film’s humor being hit and miss to me, but at least it didn’t fully lowered itself to the levels of certain shows broadcasted in local channels.

Despite ¡Asu Mare! being highly successful in the box office, I’m against the idea of a sequel because I’m not sure if it’s necessary to see Carlos Alcántara’s post-Pataclaun life, which was smartly avoided in the same way a biography/comedy film like The Sessions skipped over Mark O’Brien’s life right after he met his wife. Why? Not everything should be seen in its entirety and it can ruin the experience and feel of the first film you liked prior to the sequel film.