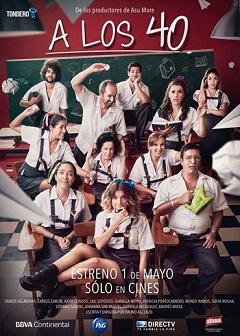 When it comes to reasons as to why people should see Peru’s latest blockbuster, one of the reasons they’ll often tell you is because it’s Peruvian and that we should support Peruvian cinema. Nowadays it’s easier to say that given the success of Asu Mare, but as Mirella says; cinema is something that isn’t patriotic at all. However, I’ll give you one legitimate reason to see A los 40 despite its unappealing trailer [1]: Sofía Rocha.

The movie deals with an all-girls high school reunion, gathering the ex-classmates who finished high school 25 years ago. What seems to be a simple rencounter turns into wackyness and not-so-smooth moments for certain characters, which makes them reevaluate their lives as well as their future.

Just like Asu Mare, A los 40 relies on nostalgia and easy humor, gags and lines tailored for Peruvian masses. While the former had a strong backbone in Carlos Alcántara’s life as its source, A los 40 doesn’t fully live up to its title in regards to the issues most of its characters deal with since almost none of those are exclusively linked to the characters’ current age… except for reality TV star Julia Dueñas (San Miguel), who has a troubled relationship with her Argentinean daughter Melissa (Espósito), and also happens to have an affair with a younger guy (Salvini), who studies with Melissa. To a certain extent, the relationship between Francesca (Condos) and Luis Miguel (Alcántara) goes with the film’s title as Francesca wants to get married to Luis Miguel despite his son (from another relationship) not fully respecting her. The rest of the issues are things people would have dealt with before turning 40 years old: work, relationships, friendships, lives and so on.

Let’s talk about the best: Sofía Rocha as Bárbara, the workaholic closeted lesbian who had a past relationship with Sofía (Neyra) back in their high school days… but things have changed and so have their lives. Bárbara became a successful businesswoman and had a family while Sofía became a professional photographer, they meet again and it is interesting to watch. Rocha’s presence and strong non-stereotyped performance in A los 40 along with her great chemistry with Neyra provided some really unexpected interest and engagement towards her character, and not only because almost everyone else was uninteresting to watch. Bárbara stands strong on her own account in any other environment or film, she was awesome.

For better or worse, A los 40 works as a Pataclaun reunion (of sorts) with rampant Peruvian stereotyping. While Wendy Ramos fared decently as Lourdes, the nerdy reunion organizer, and Gonzalo Torres was reduced to a mere cameo, Carlos Carlín was the hit-or-miss nerdy pathetic Eddy who ends up having things in common with Lourdes — Pataclaun fans can now say Tony finally had his way with Wendy (the pairing worked quite well). On the other hand, Johanna San Miguel shouts way too much for my taste- she wasn’t that funny to me with her lines and the idea of her having an Argentinean as her daughter is head-scratching, and while Espósito’s performance was slightly less irritating, the other two guys involved with them were pretty much eye candy material, yet slightly more human than them.

Alcántara was a mixed bag: while he had his share of funny moments and gelled well with Condos (who fared better with Rocha in a scene when they reevaluate their lives), he suffers the most when Luis Miguel goes all Death at a Funeral on us, and the film becomes a hit-or-miss stoner potfest. The worst happened when Luis Miguel popped up as comedy relief in the strongest scene, preventing the film from getting into real territory. The uneven writing for him made me wonder if Bruno Ascenzo actually wrote the screenplay all by himself considering Tondero Films was hellbent on replicating Asu Mare‘s success at any cost.

While the above seems like I’m really disappointed with A los 40, at least I didn’t left the theater enraged and frustrated like I did with Rock of Ages. A los 40 isn’t anything special or original with its average content, but I would really love to see Sofía Rocha in better projects. She makes this film get an extra quarter star from me.