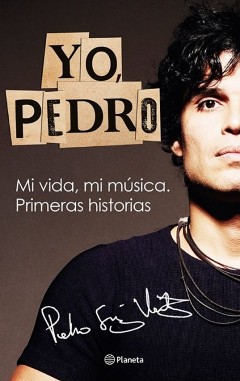 I have always liked Pedro Suárez Vertiz’s songs for the most part — they sound fun — so when he decided to release a book about his life, I ended up buying it. Reading Yo, Pedro can be done pretty quickly: it’s only just 158 pages. However, the book made me wish that it could have been edited better. Then again, this wasn’t meant to be a masterpiece nor a best-seller.

For those who don’t know (or remember) Pedro Suárez Vertiz very well, he’s one of the biggest mainstream rock stars in Peru (and South America too during his peak years in the late 90’s). He got his big start with Arena Hash in the 80’s and then got much bigger with his solo career, which includes hits such as Me Estoy Enamorando [MV], Cuéntame [MV] and Degeneración Actual [MV].

Yo, Pedro pretty much deals with past stories from his life, including family, his musical career and many of his thoughts on diverse topics as well as addressing one of his latest issues: his motor neuron disease, the one thing that has kept him away from the spotlight for the past few years.

The beginning of the book wasn’t good at all: it was unsettling to see Jamie Bayly — one of Peru’s popular figures in literature and television — dishing a prologue that was meant to praise Pedro, but ended feeling pretty damn lifeless. However, the book quickly recovers momentum when PSV addresses his Dysarthria [1] disease, which is touching and interesting to read how his life has changed because of it.

PSV is indeed interesting as a person/celebrity. With Yo, Pedro, the book’s biggest moments happens early on with the disease addressing as well as when Pedro talks about music: the origins of Arena Hash, parts of his career and mentions of the Miami music scene in the 90’s were very engaging topics. He even gets bonus points for writing the whole book all by himself for the most part, but that’s one of the biggest problems with the book: the editing is uneven and make other topics look tedious to read. Reading about Pedro’s thoughts on religion drained the fun out of the book, but reading about his thoughts about love and women were somehow more tedious than the religion bits, considering he relies on this often for the composition his songs. The parts in which he gives life advice is a mixed bag too, but the other two points are more noticeable.

To no one’s surprise in Peru, Yo, Pedro is already a huge hit in sales because most Peruvians have the tendency to support our mainstream acts to death, regardless of quality. Overall, I think PSV deserves better than what the book showcased. This might stand a chance at getting a biopic adaptation because of the book sales and the recent popularity/success of Peruvian films in the local box office [see: ¡Asu Mare! and Cementerio General].

Maybe we can kill two birds with one stone and make the upcoming ¡Asu Mare! sequel about Pedro’s life instead. Or maybe not. Still looking forward to his upcoming studio album whenever this happens.