Fresh Off the Boat – Season 2 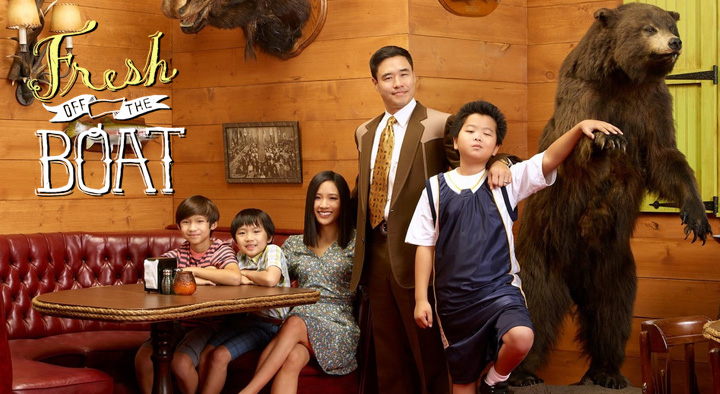 Though Fresh Off the Boat wasn’t ABC’s most successful debut (I think that was Black-ish [1]), it was successful enough to grant its first 13 episodes a full season renewal. We left off Eddie (Hudson Yang) defending his Chinese roots buried deep deep inside his school research project, leaving Mama Jessica Huang (Constance Wu) quite proud. In the new season, we refocus our attention on the Huangs to let them all grow.

The start of the show is a tricky one, as it doesn’t fully kick it until Shaquille O’Neal Motors (ep03), in which we start to see more of the relationship between Jessica and Louis (Randall Park) which is further explored in Love and Loopholes (ep12), Keep’Em Separated (ep15), Week in Review (ep18) and Hi, My Name Is… (ep20), where we learn how the fateful meeting between them happens; as well as the importance (or unimportance) of a name, as little Evan (Ian Chen) –who’s not so little any longer– opens his first bank account.

While Eddie; who’s no longer the sole focus of the show thanks to the spat between author-producer-voice-over-of-the-show Huang with the actual production of the show; bonds with his friends, gets over his first crush and gets his first fly girl (Alison, played by Isabella Alexander); he also finds out his mom can be cool (ep22), earns the respect of his dad (ep17) and gets to play big brother to his siblings, who in turn get their own arcs! First off, Emery (Forrest Wheeler) is his cool suave self when his world breaks in two as he discovers his parents spending a romantic night… doing their taxes (ep12), thus learning that love is all about the small romantic gestures that may not seem romantic at all. We later discover that he’s been having small outbursts of anger, since he’s used to bottling things up inside; and that, yes, his friends are starting to hit puberty (in a comical spontaneous growth of a wispy mustache) and Emery doesn’t exactly know how to deal with them. All these first love and boy stuff has led to a lot of bonding time with their father, who hits his own mental breakdown when he can’t handle being the uncool dad (ep16).

We also get to explore Evan’s growing up, as he loses another tooth in the first episode, paving the way to -possibly- one of the best episodes of the season in The Real Santa (ep10), written by Kourtney Kang, in which he accidentally discovers that Santa may not be real. In order to preserve his innocence a little while longer, Jessica (dressed up as a Chinese version of Santa Claus called Lao Ban Santa (Boss Santa)) tells her boy that:

You must promise never to tell anyone about me, not even your brothers. You are a special soul… one who believes in magic but still has a scientific mind. Like me.

On top of that, Jessica gets some more bonding time with best friend in the neighborhood, Honey (Chelsey Crisp), who continues being Jessica’s rock on her love for Stephen King and everything morbid, and the one keeping Jessica’s feet on the ground when it comes to social etiquette and superstition— their best episode, Jessica Place (ep19), the Melrose Place spoof, where Emery learns to deal with his negative feelings as Evan pulls some Machiavellian strings to get what he wants, and Honey and Jessica learn that people that seem to suck are like this because they might be sticking up for a friend.

Fresh Off the Boat also made history with the airing of Year of the Rat (ep11), which is apparently the first time Chinese New Year has ever featured on television— finishing off the checklist with the hysterical wake-up call because you’re late, the member of the family that needs pills for long trips, the walking long distance to save on parking, red envelopes collecting, dragon dance, hair cuts, house cleaning, Chinese fortune telling (We Done Son, ep09, written by Ali Wong), bringing a box of on-sale oranges to your future Chinese mother-in-law, and the epic explanation of the Polite Fight in Bring the Pain (ep24, the last); which features Ken Jeong as Gene, Louis’ brother, whose stranded relationship is explained in a way that leaves us with a cliffhanger. It’s right on top with the Santa episode, because it’s comical in its handling and becomes super serious with its implications. I’m not a big fan of Jeong’s appearance in the media, but I thought his reasons for being mad at his brother were quite valid.

Overall, it seems like the show has a lot of filler content when you’re going week by week. However, there were a lot of elements that made it much more meaningful this time around while still maintaining a strong sitcom format. Extra quarter for the Santa episode and the last episode.