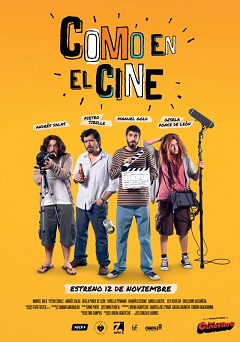 Gonzalo Ladines, best known in Peru as one of the co-creators of Los Cinéfilos (Peruvian YouTube web-series) and also as one of the screenwriters of Viejos Amigos, launches his directorial debut in the form of a comedy film that deals with video production.

Como En El Cine (which translates to Just Like In The Movies) follows Nico (Gold), a man whose life is falling apart- not only does he get fired from his TV advertising job, but he also gets cheated on and dumped by his girlfriend, and gets kicked out of her apartment, too.

As a result, Nico moves in with his best friend Dani (Ponce de León), who tells him to get over his recent break-up, pushing him to re-encounter himself with his true love: Cinema. Having directed only one short film in his life, Nico reunites with his ex-university buddies, producer Rolo (Sibille) and cameraman Bruno (Salas), in order to shoot a low-budget short.

Ladines’ screenplay displays nods to his previous projects and his love for cinema, but it focuses mostly on the process of film-making through Nico’s story; there’s also the theme of friendship and fulfilling dreams and passion projects that people had before giving them up, which ends up being the film’s heart. It’s a simple idea, but the strongest assets that Como En El Cine has is that the comedy doesn’t feel localized nor cringe-inducing, something that made enjoying recent comedy films involving Carlos Alcántara difficult. Though, I have yet to see him in Perro Guardián. Plus, the supporting cast works really well to carry –and ground– Gold’s Carell-like character, who can be either hit or miss depending on your sense of humor.

I actually thought that the supporting characters were way more interesting to watch than Nico, especially Dani and Rolo, the latter easily steals the show as the film’s best act — Sibille is legitimately funny here, with Ponce de León as a close second. By the way, Dani is note-worthy since she’s a brash and funny lesbian character that isn’t written in stereotypical fashion, and people treat her like a regular human being. She also shares similarities to Nico in terms of not really fulfilling her dream, remaining daddy’s little girl since she can’t sell her paintings at all. On the other hand, Sibille’s Rolo didn’t catch a big break in film-making, settling down for a university job and crushing on his former teacher, while Bruno works in the telenovelas scene, and Ariana (Pennano) fails to break the child actress curse.

The comedy genre is the easiest one for the Peruvian cinematic industry to pull off since there’s a solid market craving for more, alongside horror films. There are people that say that Como En El Cine is easily the best Peruvian comedy in years. I can agree with the statement, but Peru hasn’t had a truly outstanding comedy, not at least in the past 25 years — Viejos Amigos and Pantaleón y las Visitadoras come to mind for above-average in the genre. However, Como En El Cine tops both of them in terms of humor and proves to be fun to watch.

P.S.: There’s an extra scene in between the credits.

Also, stay tuned for our interviews with the director and cast members of Como En El Cine.