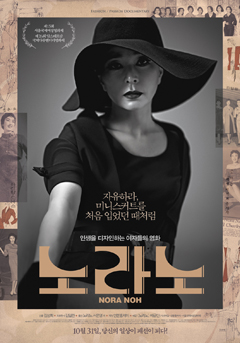 As a non-savvy fashion person, it’s surprising that fashion schools in Korea (and maybe across the world) would only cover the importance of people like Coco Chanel, Yves Saint Laurent, Christian Dior or Jean Paul Gautier, completely undermining their homegrown industry. But so it seemed for Korean designer Nora Noh, who had been literally excluded off the curriculum despite breaking down some of the toughest barriers of her time when she began making clothing for modern women like herself.

The story on itself is amazing, and director Kim Sung-hee knows it. With a historically-rich backdrop, during the Japanese occupation of Korea, Nora Noh was married off early to escape the horrible fate of comfort women across East Asia, though she later divorced and ended up studying fashion design in the US. The rest is, of course, a not-so-well-known story.

The documentary, simply titled Nora Noh, follows the life of Noh as she, her assistant and team set out to prepare an installation in honor of her life and work, which is juxtaposed with soundbites by Korea’s current fashion people who are surprised by the subject’s trailblazing path without much fanfare, comparing it to the new popularized Hallyu Wave hyped to take Korean culture to the world when Noh had already done it decades ago. Further commenting on the overvalue placed on foreign talent (makeup artists, photographers, models, etc.) when homegrown talent is unappreciated. Nora Noh, for example, had her own Vogue cover and is credited to be the first person to put a fashion show in the country, back in 1956, as well as popularizing the mini-skirt alongside singer Yoon Bok-hee (윤복희), and dressing various celebrities (on celluloid/stage and real life) of the 50s and 60s, which included actress Choi Ji-hee (최지희) and actress Um Aing-ran (엄앵란), who shaped her career in the Hepburn-style that Noh had prepared for her.

Besides the incredible story of backbone, what I was fascinated by was how Noh’s vision sort of shaped film history in the nation, in a period I’m not familiar with, which just brought forth how much Korean Cinema (which was introduced back in 1897, or includes the Golden Silent Era from 1926) doesn’t reference nor honors itself in modern movies in the way that, let’s say, Indian Cinema celebrated its 100 Years [1][2]. However, Kim’s documentary doesn’t merely focus on Noh’s story or solely on her work, to the dismay of her assistant, who adds a bit of tension when prepping for the installation with a clear idea in mind: she wants to celebrate the fashion legacy, while Noh seems to want to delve into her life story… just like older people tend to do.

As a result, Nora Noh lacks a bit of backstory — oh, the irony — details like how she ended up studying in the US or a mentions of her personal life post-studies (she apparently got married and got divorced once again) to help you understand more of her not only as a woman, but as a person to reckon with. However, these details can only be found in other material, like the Koreana or WSJ articles linked below, which undermine the strength of the piece.

Overall, though, this 85-year-old fashion designer has one heck of a good story to tell.