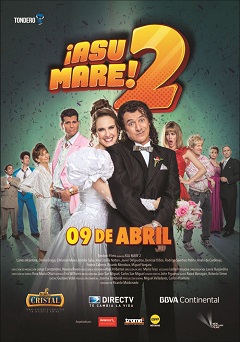 Somehow, Furious 7 managed to break the Peruvian opening weekend box office records that Asu Mare held since 2013. But that wasn’t going to last long with ¡Asu Mare! 2 premiering one week later. Considering that ¡Asu Mare! pretty much tackled all of Carlos Alcántara’s stand-up show, which was its main source, you had to wonder what would be left to tackle in a sequel film.

¡Asu Mare! 2 takes place in 1997, right around the time when Carlos “Cachín” Alcántara was starting to work on Pataclaun and he’s trying his best to win over rich girl Emilia (Drago). They actually look cute together and get along very well despite their economical differences and upbringings. However, Cachín’s surroundings are not his only issues in regards to winning over Emilia: there’s the presence of Ricky (Meier), a rich handsome man who is also a pretty seductive guy and quite an asshole of a person who will put him through hell in his pursuit of Emilia.

Much like the previous film, ¡Asu Mare! 2 relies on nostalgia a lot, most notably with the Pataclaun and Torbellino cameos as well as the running gag of hearing Carreteras Mojadas [MV] every time Ricky rides in his car, the latter being actually something pretty funny along with the other running gag of people confusing Cachín with Carlos Carlín a.k.a. Tony from Pataclaun. In terms of the jokes presented in the film, they’re hit and miss. Like I said a few years ago on my ¡Asu Mare! review, I’m not part of the target audience for “peruvian humor” products, yet the acting highlights in ¡Asu Mare! 2 includes Christian Meier as Ricky who greatly pokes fun at his own image and steals the show every time he’s on screen, Ana Cecilia Natteri as Cachin’s mom (despite her reduced screentime) when she has to console her son following a dark moment, and Rodrigo Sánchez Patiño as Ricky’s minion who provides great comic relief and happens to be a Machín fanboy. The rest of the characters were hit and miss for me, some of them even being way more cringe-worthy than I expected them to be.

The biggest problem with ¡Asu Mare! 2 for me didn’t had to do with the abusive product placement (which was a given), the hit-and-miss jokes, or even the ones that made me feel second-hand embarrasment. It all comes down for me with how the film is set and shot with dated and future references. The sequel is supposed to take place around 1997-1998, yet there a scene with Emilia and Cachin going to the cinema in which the posters include Silence of the Lambs and Edward Scissorhands. I know film distribution in Peru back then was bad, but it wasn’t that criminal, right? There’s also a shot of the Lima Metropolitano buses briefly seen that could have been easily avoided by cutting it out as well as showing actual car models from 2014 or the “¡Vamos Cobras!” joke [see: Peruvian competition tv series Esto Es Guerra] uttered by Carlos Carlín near the end of the film. While I didn’t hate the film, Maldonado’s displaying of the Peruvian past made ¡Asu Mare! 2 frustrating to watch for me along with wondering at which point Alcántara really started making money out of his Pataclaun job despite the film displaying him as a poor guy for laughs.

By the way, I noticed at my screening that people enjoyed the film less than the first one. After all, it’s easier to connect with a film about a guy overcoming the odds to become a success story rather than connecting with a rom-com film, regardless of film quality. Anyways, the trailer [1] doesn’t do ¡Asu Mare! 2 much favors since it shows most of the highlights (?), but I still enjoy Meier’s meta joke that superbly takes a shot against both films.

¡Asu Mare! 2 had the potential to be actually better than the previous film. It doesn’t suffer from the back-and-forth pacing that ¡Asu Mare! had with Cachín’s past film and the stand-up scenes, which annoyed some people. But the themes of class divide, pride, origins and friendships that were present in the sequel could have been sharpened stronger along with improving the jokes to make it a more meaningful film rather than just being a simple cash-grab.