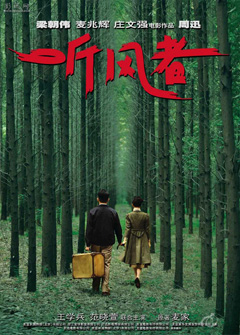 There’s this thing about mis-marketing, it can ruin a movie experience of you. And this is what could happen to anyone seeing the final poster for The Silent War [1]. You’d think it’s a slick spy thriller set in the historical backdrop, and you wouldn’t be wrong because the film IS about spies breaking codes circa 1949 with the backdrop of the establishment of the People’s Republic of China.

The film stars Zhou Xun as ace spy agent Xuening, undercover agent for the agency simply known by the numbers 701. They dedicate their lives to finding enemy communication channels and decoding their Morse code talks… which in Chinese seems to be double the work. The 701 agency is in a pickle when the signals are all lost, so they must recruit “a listener” who can listen beyond the static of the signal.

Xuening’s job is to find a piano tuner who’s supposed to have the most in-tune ear in the country (or maybe the world), when she meets He Bing (Leung), the blind “listener” who was the secret to this famous piano tuner. Doesn’t sound like much, huh? The literal translation of the title of The Silent War is “the wind-listener,” which should tell you straight away that this isn’t about the historical happenings of the movie, but this man… and maybe the anonymous heroes. The closest comparison would be the code-talkers in Windtalkers. He Bing is like a superhero with enhanced hearing a la Daredevil that is able to listen to the impossible sound of the wind. He is even able to determine the traits of a person by the strength they apply in their Morse-coding, unbelievable things like that.

Despite the suspension of disbelief, Tony Leung does great — he’s charismatic… even funny, working great without one of his greatest tools: his puppy eyes. His scenes with Zhou Xun — whom I think is the real lead in the film — are great, but they seem to always work great together (The Great Magician). The same thing could be said from Zhou Xun and her only almost-confrontation with Mavis Fan, whom she also confronted in Flying Swords of Dragon Gate.

Though there’s an obvious lack of action to pump the blood of viewers, even with Zhou Xun doing some very awesome fighting… in heels, the visuals in The Silent War are gorgeous, with stunning photography by Anthony Pun — especially in the last scene in the middle of nowhere surrounded by the fallen.

The pace of the film seems… slower than usual. It requires a lot of patience from its viewer because The Silent War seems to have a one-and-a-half hour setup, a minuscule middle to set in motion the conclusion of the film. There’s no overly complicated happenings, no twists, just some straightforward storytelling… and there’s nothing wrong with that as long as you’re not expecting something else entirely.