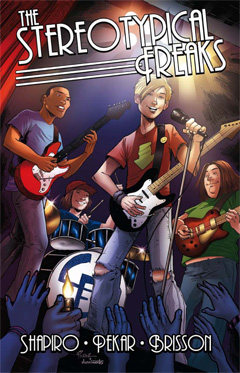 In the past few years, the world has witnessed the rise of Apple, the fall of Xanga, and the slow, insidious creep of Justin Bieber’s haircut — all things that have seriously altered the paths of teenagers everywhere. Despite the tidal changes in trend, however, one thing stays the same: High school sucks.

So muses Tom, the rock ‘n’ roll-loving underdog hero of The Stereotypical Freaks. It’s the beginning of his senior year, and things just aren’t going his way. His childhood best friend dumped him for the football team. He sits at the losers’ table at lunchtime. And, of course, it’s been five years and he still hasn’t plucked up the courage to confess his love to the girl of his dreams.

While author Howard Shapiro chooses high school as the backdrop, the issues tackled in The Stereotypical Freaks are universal ones: friendship, love, and the pursuit of happiness. Shapiro’s cast of characters navigate the waters of adolescent turmoil with little more than gut feelings that sometimes steer them wrong, but always guide them true.

As the Battle of the Bands looms in the distance, the characters all come together in various ways to form the eponymous band: Dan, the smart-aleck sidekick; Mark, the popular quarterback; and Jacoby, the heart of the team. Throughout their journey, each of the characters explores what is truly important to him. Though rock ‘n’ roll is an inexorable bond, the characters soon discover that something more ties them together.

The Stereotypical Freaks is a good introduction to the graphic novel medium for young adult readers who are interested in coming-of-age stories that are relevant to them. The art style is lively and expressive, and the dialogue plays on the daily struggles of growing up. One of the main weaknesses of the novel, however, is that the story stays a little too safe. The tropes are present and true, but scrubbed clean of real-world context. The Stereotypical Freaks drives home its message with admirable focus while leaving the grittier details of typical high school life by the wayside. The result is a slightly sterile version of youth.

Nevertheless, though The Stereotypical Freaks has its flaws, the story Shapiro tells is still poignant. There is some comfort in the world he portrays, one in which the hero gets what he needs, though it may not be what he wants; and one in which, despite tragedy, life is still beautiful.