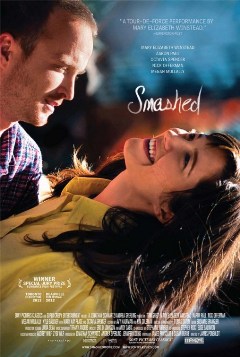 Due to my work, I had to travel outside the country for a couple of days. On my way back home, LAN’s In-flight entertainment system offered me the chance to watch films from 2012, including Argo, Killing Them Softly and Lincoln. However, I decided to watch new-to-me films such as Seven Psychopaths (awesome film, by the way) and Smashed. The latter made me think that Mary Elizabeth Winstead deserves more than just critical acclaim: she should have been an Academy Award nominee by now.

Smashed lives up to its title as the film follows Kate (Winstead) and Charlie (Paul), a young married couple happily in love and drinking lots of alcohol every single day. However, their relationship is put to the test when Kate decides to get sober after hitting rock bottom twice in less than a week.

Alcoholism isn’t a new subject by any means in film — the upcoming Oscar-nominated films showcased drunks through the main characters in Robert Zemeckis’s Flight and Paul Thomas Anderson’s The Master — but it’s still something that truly hits hard to many people in the world. Smashed explores Kate’s struggles to live a better life in spite of her selfish husband, who prefers living life the easy way rather than doing the AA’s 12 Steps program along with his wife. There’re also other people who dealt with alcoholism before, which include Kate’s co-worker Dave (Offerman) and AA participant/friend Jenny (Spencer).

Mary Elizabeth Winstead has been in films over the last few years. She has been nice to watch on films such as Death Proof,  Scott Pilgrim vs. The World and even Abraham Lincoln: Vampire Hunter. But her wonderful performance in Smashed is the best thing she’s ever done in her career. With real emotions and vulnerabilities, Winstead plays Kate as a charming yet messy alcoholic woman whose life seems apparently fine, but her inner struggles say otherwise and her lies at work — which cover up her alcoholism issues — don’t make things much better. Despite her issues and behavior, Kate manages to be the kind of character you want to root for to succeed in life. Winstead’s performance felt natural and raw to me, I hope she can get bigger and better roles to showcase her talent more often.

The rest of the cast fared well in their roles. Aaron Paul has great chemistry with Winstead and smoothly plays the role of Charlie, who can be both selfish and caring about his wife according to his convenience. Octavia Spencer’s Jenny brings wisdom and support to Kate while Offerman’s Dave nicely walks a thin line between being awkward and caring as he bonds with Kate over her problems. Megan Mullally and Mary Kay Place are fine in the roles of Kate’s boss and mother, respectively.

While the film’s content is mostly dark, there are also some funny scenes that help lighten the mood between Kate and Charlie. But more than anything, Smashed succeeds thanks to its talented cast and a strong screenplay that doesn’t sugarcoat its content from start to finish.