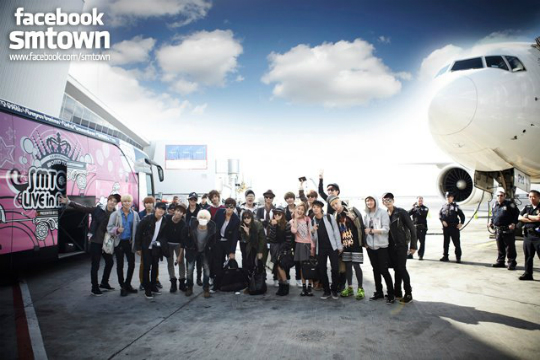 After traveling all over the world, hitting seven different international locations since 2010, the famous SM Town Live finally made it to New York City. From early in the morning on October 23rd, Madison Square Garden was flooded by K-pop fans proudly brandishing their fandom colors. Meanwhile, tourists and locals alike stood by wondering who could possibly ignite such a massive movement. Many even wondered if Justin Bieber was going to be performing.

Oh the ignorance of this world to the power of the Hallyu wave [1].

Billboards in Times Square and at the venue announced the big event while the elusive SM Town pink bus rolled around the city followed by screaming fans. Not to mention it was be the very first performance by an Asian artist in Madison Square Garden. With all the hype there were grand expectations for SM Town Live in NYC.

For the most part, I was extremely excited merely because TVXQ would be there. Incredibly, by concert time, I was excited to see every single group. My roommates made sure I knew all of SHINee’s names and most of Super Junior’s. I even learned a few Girl’s Generation songs, especially their latest maxi-single The Boys [MV].

As the clock ticked closer to 7 o’clock, more and more people were lining up for the concert. KBS and MNet cameras were all over the place interviewing fans and taking footage of all the fan events going on the grounds of Madison Square Garden. The merchandise booth line coiled around the corners of the venue. Flash-mobs were suddenly erupting around the Garden. Fans were chanting for SM Town while they waited in line. The atmosphere was over the top amazing. It was crazy! Surprisingly, though, as fans filed into the venue everything went extremely smooth. 15,000 people walked into Madison Square Garden and took their seats in a very orderly fashion.

While everyone waited, three gigantic screens flashed announcements, commercials and, most important of all, the official trailer for BoA’s Hollywood debut movie, Cobu 3D. It reminds me of every other dance movie but I’m certainly looking forward to watching it.

Finally, and with absolutely no warning, the concert began. All the lights went off and everyone went crazy. F(x) opened what was quite an amazing show. From then on, there was no stopping, and I mean it. From the moment those five girls stepped into the shadows of the stage SM Town didn’t stop to take a single break.