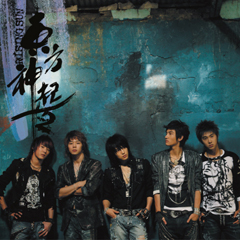 Let’s be real, Tri-Angle was the type of album that could very easily be considered a flash in the pan, lost in the milieu of pop albums from bright-eyed boy bands coming out of the pop scene in the early 2000s. DBSK needed a follow up that would separate them from the pack without sacrificing quality and the group’s uniqueness. What we get is Rising Sun, a surprising sophomore effort that shocks from the opening track.

First of all, who the hell starts an album with a song like Tonight? It’s, quite frankly, a masterpiece. The largeness of the song is unreal. The vocal arrangement is not at all for the faint of heart, being both intricate and vocally demanding. It’s a “grown-up” song, something you’d expect on the “The Quiet Storm” in the mid-late 90s — late-night R&B. Not only is the arrangement elaborate, the execution is amazing. The ending jubilee, dramatic runs and high notes, is astounding especially by pop standards: Junsu’s flawless ability to create such grandness with his distinct voice, Jaejoong and his unreal vocal timing and improvisation, Changmin’s unconscionably high notes, Yunho’s unwavering and steadfast center, and Yoochun’s grit and passion. Those last few moments are almost alarming.

After the first track, Rising Sun continues to explore the depth of the group and their ability to bring startling quality to their pop music. The title track is actually one of most blatantly “Kpop” songs on the album, drawing on elements of pop and rock with bits of rap sprinkled in to create a high-energy pop experience.

That being said, Rising Sun suffers from the same pitfalls of the debut: awkward song placement and song choice. Using Tonight as the opening track is almost overkill, as if begging for praise and attention before the album even starts. From a purely pop perspective Rising Sun is a brilliant track; however, placing it after a power ballad throws the album’s balance off from the start. Again, the group is paired with TRAX for a song that’s an off-putting amalgamation of metal and pop (Free Your Mind). We also get a dose of sugary sweetness with track Love Is…, the second purely “Kpop” track on the album that oddly enough precedes Free Your Mind. It’s a song you’d expect from a group strictly catering to an audience of preteens and proves to be a serious low point for me.

Barring the album construction, overall Rising Sun is a step up in terms of quality. Again we have an album that’s surprisingly ballad heavy. However, the compositions have a cleaner polish. We get a sound that’s fuller than what the debut offered. It seems as though the group is pushing the boundaries of stereotypical pop while still staying within its confines, a very precarious line to toe. Big ballads and huge vocals pretty much dominate Rising Sun, each song utilizing each member’s skills perfectly, augmenting what’s already there with the power of incredible song composition (Love After Love, One, Love Is Never Gone).

There are moments of sheer vocal brilliance on Rising Sun (namely Tonight and closing a cappella track, Always There…). Though this album suffers from a bit of perplexing song choice, it’s still an incredible sophomore effort. This sort of unexpected maturity and depth is what makes a group truly great. It was also the first real indication that DBSK were meant to dominate the world of Kpop.

You can listen to Rising Sun on Xiami. You can buy it on YesAsia, DVD Heaven, and KpopTown.