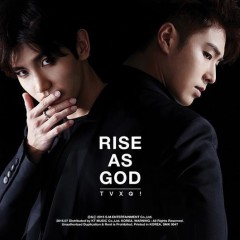 Let’s not beat around the bush. SM hasn’t done right by their most influential group, giving TVXQ tracks that while more dance focused have lost sight of the music, seeming more to be attempting to compensate for a missing 60 percent than exploring what Yunho and Changmin are actually capable of. The group needed a damn good album to back up a title like Rise As God. They did not disappoint. Rise As God is unequivocally the most complete album TVXQ has released in the past five or six years. It does so much more than compensates. It excites and inspires.

The album opens on a promise, hinting at music that’s at once mature and subtle. Lyrically Vertigo isn’t anything exceptional, but the song’s execution is noteworthy. Vocally there’s an awareness that hasn’t really been there in great abundance for quite some time. Crisp vocals, large without being unnecessarily ostentatious. That musical awareness pervades Rise as God.

The next track is the first of two singles. Unsurprisingly it’s an uptempo dance track. Perhaps more unexpected is the fact that it’s a solo. Honestly Yunho’s no rapper. Whatever delusions SM had of making him one were never realized. Regardless, this particular track is more than just a means for the leader to flex his “swag.” Champagne manages to incorporate both classic dance R&B and a sound that’s undeniably TVXQ. What’s more commendable is the vocal arrangement, allowing Yunho to sit mostly in his tenor with beautiful moments of his clear falsetto sprinkled in  the chorus. Fans got to fully experience the leader’s range without any of the oftentimes nasal tone Yunho displays when reaching for too much.

Changmin’s Rise As One is what we expect from him: a wide range culminating in a strong full-voiced falsetto. His vocal range will always be impressive, but the song does him no favors, being mostly an attempt at reaching Western audiences (a sound similar to a lot of the wounded artist tripe that pervades soft rock radio) than something that challenges the singer or at least gives him something interesting.

This musical and vocal complacency disappears with song 4. Everyday It Rains is a gorgeous track, both full of wistful reminiscence, to a simpler time of sipping lemonade in the summer, and as fluid as the deluge coating the track. It’s a simple love song wrapped around a metaphor for the coming of a sweet, soft rain, our protagonist’s lover coming in on the sigh of a summer storm and leaving a kiss on his shoulder. Everyday It Rains neither insists on Changmin’s range, nor pushes Yunho for more than he’s capable of, but has a vocal shade that wraps the listener in something warm and soft.

Though a bit unexpected, it’s not surprising the album’s production credits are decidedly Western. The level of soul and classic R&B throughout Rise As God points to composers who’ve grown up with the likes of Earth, Wind & Fire, Yong Holt Unlimited, and Incognito. The following tracks are all nods to ’70s and ’90s R&B and Soul both in musical composition and vocal arrangement. Tracks Smile and Top of the World round out a trio of tracks that put a bit of a hitch in the heart of fans who’ve reached an age where music carries more meaning and weight, while song Dominus delves lightly into neo-soul, playing on that heavy minor third chord and thick vocal and harmonic layering.

Changmin’s Apology and Yunho’s Komplikated fit their vocal personalities as well as show us different sides of their respective concepts. Apology is a smoky slither of sensuality wrapped in a yearning apology from a lover who’s seen the error of his ways. It’s syrupy without being cloying, all sex and sweat and none of the unnecessary stickiness of most sugary ballads. Komplikated, meanwhile, is more of SM exploring the snare and pop of House music, this time delving deeper into the genre, taking it from the streets of Soho and giving it to Yunho to play with.

Rise as God is a revelation.The arrangements are simple, neither insistent nor over-the-top. We’re gifted a vocal color and maturity we haven’t heard from the group consistently on an album since the duo was a quintet. Whoever took charge of this project reached in the reserves of TVXQ’s former brilliance to give the boys and their fans truly sensational music purely for music’s sake. It’s definitely a blessing and a pleasure to have been given a reminder of exactly why TVXQ are legends of the industry. Yunho and Changmin have finally convinced me they’ve done their job at preserving the title Rising Gods of the East.

You can listen to Rise As God on Xiami and Spotify. You can purchase it on iTunes, YesAsia, Synnara, Kpoptown, and Ktown4U.