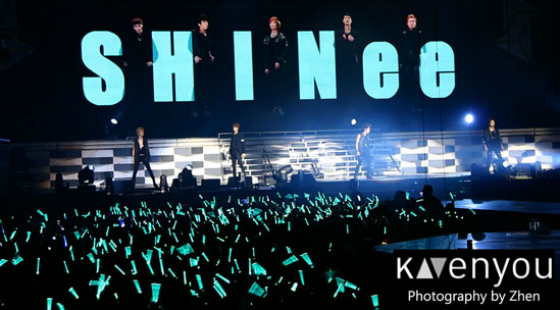 I admit, I really REALLY like SHINee. I think that me going all the way to Singapore to catch one of their concerts is proof enough. In reality, I was in South Korea, so seeing as I was close by I treated myself. I have already had the pleasure of seeing them in Paris during the SM Town concert, so I was excited but wasn’t expecting too much.

Good thing I didn’t because, sadly, this was not one of SHINee’s best nights. The best way I can explain this is by quoting Seoulbeats.com in an article they did about the Kpop world, focusing on an interview the Lee Soo Man (the CEO of SM Entertainment, the company SHINee belongs to), Point: Slave contracts, the grime of K-pop [1], the writer wrote the following:

All the stress, exhaustion, and lack of reward grinds the idols into mediocrity. They don’t perform to the best of their abilities anymore because the whole performance and marketing schtick has become a job, not a passion. […] This downward trend becomes quite evident during live performances. How many times have fans witnessed the phenomenon of groups that start out strong, motivated, and fantastic, and then slide downhill fast as time goes by? You can see the unhappiness written in their expressions.

Not only did SHINee look like they didn’t care that they were in Singapore, their leader Onew looked ready to faint. He was so tired that he was about to drop to the floor. Cut to a small intro video for the next set of the concert and he came back filled with energy. To be honest, he looked quite high. I don’t think I want to know what happened backstage, but it was a bit alarming to see it.

Which is a damn shame because when it comes to Korean boybands, SHINee is one of the better ones. They have good songs, they dance well, they perform nicely. I really enjoyed how the concert was done in sets; where they started off with some of their more energetic songs, then did some solo stages — where the youngest member, Taemin Lee, stole the show — then some ballads, and to finish the whole thing, some of their hits such as Lucifer and Ring Ding Dong.

I know that I may be judging SHINee too much. I am aware of the grueling schedule they have and that they probably don’t get enough sleep between gigs, but when I go to a concert I don’t go there to see robots dance and sing. I go there to experience something with the artist I love. I want to have fun as well as they have fun. How should I feel when the show causes the artist more grief than enjoyment? I would have preferred for SHINee to rest than for them to look like ghosts on stage.

But in all fairness, they did a good show. They sang well, managed to entertain the entire venue and all of the fans left happy. That’s what really matters but I hope they do better in the rest of their concerts.

P.S. SHINee, you need to chill with the wire work. If you are going to fly over your crowd then do something interesting. That trick is getting old fast. D.S