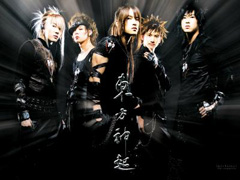 This is where it all started, the first tentative steps into full-blown superstardom that was Dong Bang Shin Ki. Fresh faced and thirsty for the spotlight, these five boys, who never actually knew each other before joining the trainee ranks at SM Entertainment, brought ambition and incredible talent to the table and came up with one of the most promising debuts from a pop vocal group.

Tri-Angle is definitely the type of album you want for a group of teenagers just starting to cut their teeth in an industry oversaturated with candy pop. Lyrically the album is what you’d expect from a group of teen boys — a lot of love songs and beat-heavy ballads. However, what makes this album so singular is just how heavily rooted in 90s R&B it is.

It’s an interesting move to place so many ballads on a debut album, especially when the goal is to introduce a fresh, energetic group of kids to the world. However, for the purposes of garnering a very young teen demographic, it makes sense to get the girls swooning early, and surely Micky Yoochun’s throaty introduction (in English) on opening track I Believe had girls screaming from the start.

To be honest, Tri-Angle’s construction in terms of placement and song composition makes the album lack focus. The title track includes an “interesting” black metal break — compliments of SM’s first rock group TRAX — and a cameo from SM’s biggest seller at the time BoA, a jarring juxtaposition against the boys’ deeper vocals and the darker tone of the song. Placing this power track after two ballads and preceding a song that asks Will You Be My Girlfriend? is a puzzling approach to say the least.

Tri-Angle’s only other upbeat song, dance track The Way U Are, also seems a bit strangely placed, seemingly tacked on to the end of the album just to ensure a dance track made the cut. And in the midst of the more vocally mature balladry, tracks Hug and Hey Kid seem haphazardly placed, highlighting the boys’ sugary innocence for the sake of a younger audience. It’s not unexpected to find these two tracks on a debut album by and targeting teens; however, in the grander scope of the album, which seems to focus mostly on the group’s supposed vocal maturity, these are odd additions that have little effect.

However, once you get past the odd song choice and placement, you’re struck by just how powerful the group is vocally. When stripped of the music, the boys are in a class all their own. When experiencing the album in its entirety, it’s shocking just how incredible their ability to blend really is. Tracks like Whatever They Say and My Little Princess are powerful simply for their implication. Here we have a pop group that’s all about getting young girls to fall in love with them. But many of the tracks draw heavily from a different pop/R&B perspective, targeting an audience brought up on the likes of Boyz II Men and Shai. It’s a brilliant move, bringing in the newer generation of teenyboppers but reaching out and grabbing fans of a golden age in vocal excellence.

As far as debut’s go, Tri-Angle isn’t one of a kind, it’s not an obvious indication of the group’s dominance over the next few years, and ultimately its influence for about the past decade. It’s a pop album, plain and simple. However, what it does is bring into focus the very real and very obvious talent and chemistry the boys had. Tri-Angle is simply a good pop album, lacking seamlessness and a bit of focus but is still a testament to their natural vocal ability.

Standout Tracks: Whatever They Say, Million Men, Like Now, My Little Princess, Tri-Angle

You can listen to Tri-Angle on Xiami. You can buy it at YesAsia, DVD Heaven, and Kpop Town.