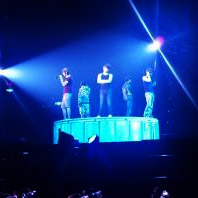 We were standing on Nagoya station waiting for an acquaintance. Hito and I were on the verge of a nervous meltdown. We were both very nervous and very much high on adrenaline. Just three months ago we had decided to come to Japan. It took us a lot of time and money to manage to get our hand on the tickets, a price that for others might be high but for us was the opportunity of a lifetime. From sitting in small Swedish fan-meetings, enjoying concerts on DVD, being envious of those who were able to see DBSK live, finally we had arrived and were going to experience everything we could dream of back home.

The venue was already filled with people waiting outside. It was very hot but there were those who had already started to queue. We dashed straight to the goods cubicles and bought more than what was planned. Everyone was happy. Groups of friends gathered together taking pictures of the trucks adorned with huge pictures of the boys, others browsing through the unofficial goods being sold on the street. Even entire families from grandmothers to grandchildren were there to enjoy the concert. I was amazed at the amount of foreigners that had come for the event, like two Spanish fans that were sitting in front of us who pointed out to other Spaniards across the place.

Suddenly the lights went out on the venue and I became a small dot in a vast sea of red glow sticks. The tension was high, everybody on their toes waiting for them; an explosion went off and suddenly high pitched voices erupted as five fine specimen of Korean men stood on stage.

The guys went right into business with “Share the World”, not that much is needed to amp up the atmosphere inside. The screams going on were loud enough, even I strained my voice as I screamed seeing Yoochun live (he is so beautiful live, it is sick).

The setlist was a bit uneven in the beginning, mixing slow and fast tempo songs. After the first MC they began with some killer dance songs, followed by their best ballads and finally making sure that everyone was jumping in their seats as they cranked the rhythm back up. I was hoping to shed a lot of tears seeing as many of my favorite ballads were being sang, sadly the members seemed very tired that day. The best singers had to work hard to make their voices work and they just didn’t seem to be enjoying the show. Regardless of that, they did a good job. Choreography was tight, they were in control and they managed to make me scream in joy several times around.

Towards the end, when they were closing the show with their most beautiful ballads, Jaejoong gave his soul as he sang “Bolero”. The sensation inside my heart was great and I cried as I saw them just giving it all. As a fangirl I can bitch much about what was good and what wasn’t, but at the end of the day nothing beats hearing your favorite songs live, standing in a venue with 9 998 other people just enjoying and spazzing together. I am already saving money for next year’s concert.