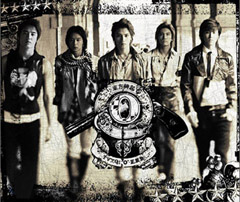 After entering Japan with a blast, the boys of DBSK went back to Korea to continue to harvest their talent and expand their influence within the industry.

The title of the album is ambitious, if not a bit pretentious. There are two translations to the Hangul: Thesis.Antithesis.Synthesis and Justice.Oppression.Solution. Both seem to point to some sort of attempt at depth on the group’s part. Of course, after releasing three albums of mostly pop/R&B ballads, it’s no surprise the group and its company wanted to try to shift things to more “mature” and world conscious fare. With the resounding battle cry of “O” throughout and the explosive composition, the title track is powerful, hearkening back to Rising Sun in its energy and ability to move audiences to at least want to dance (or in this case, perhaps take action?).

However, “O”-Jung.Ban.Hap quickly goes back to the same formula of the first two Korean releases: breathtaking vocals wrapped around simple pop/R&B compositions. We get the almost sticky sweet of “traditional” Kpop as it was in the early 2000s (You’re My Miracle, Phantom) and the beautiful balladry that quickly became their signature on each album (Hey! Girl, On & On). But it’s glaringly apparent that the album adds nothing new to the development of the group, rather “O” comes dangerously close to forcing the vocal group into a place of pop complacency.

With an opening track and title like “O”-Jung.Ban.Hap, one would expect at least something more raw, an album that shows the boys are growing more into themselves much like the audience they’d been cultivating for three years. But “O”-Jung.Ban.Hap proves quite the contradiction. The release of the album came with a few repackages. The original cover is a rugged shoot, earth tones and the cover drenched in sepia. However, the subsequent album covers are quite childish — the boys in varying costumes from a Disney-style Musketeer to a Halloween vampire, then, of course, the legendary fluffy animal costumes. And then the kicker: their adaptation of Five Fingers classic Balloons. The song is second only to H.O.T’s classic Candy as one of the songs in Kpop that every group simply must pay homage to. While the song and the multiple repackages aren’t exactly unwarranted — at once highlighting their respective personalities and garnering a younger audience — it’s slightly unexpected based simply on the very idea of the title of the album itself.

It’s not exactly surprising that most of the songs featured on “O”-Jung.Ban.Hap were also in their first made for TV film Dating On Earth (which filmed around this time, but released between 2009 and 2010). In terms of album composition, that’s exactly what it seems like: a soundtrack to a film starring our handsome quintet. Overall the album is what we’d come to expect from DBSK at that point: solid composition that highlights the shade and depth of their vocal abilities. However, it’s an album that seems to get lost in the packaging, focuses too much on simply maintaining rather than giving us more. It’s a decent album with decent songs (considering the steady growth noted in each album to date). Certainly a high-quality album, but not an album that inspires much more than a passing glance.

Standout Tracks: “O”-Jung.Ban.Hap, Hey! Girl, Remember, On & On, You Only Love

You can listen to “O”-Jung.Ban.Hap on Xiami. You can buy the album at YesAsia and HanBooks (yeah… hard to find this one).