Progressive metal American band, Dream Theater, are on tour playing music from their last album A Dramatic Turn of Events. This night, they played at Hovet, a smaller arena next to the Globen arena. The place was half filled with mostly guys ranging in age from 17 to 50 years old.

As photographers entered front stage just before the show was about to start, what struck me was the amount of ticketholders that were standing and sitting in front. There were quite a few. As the show started, the fans on the floor crowded together to get as close to the stage as possible. 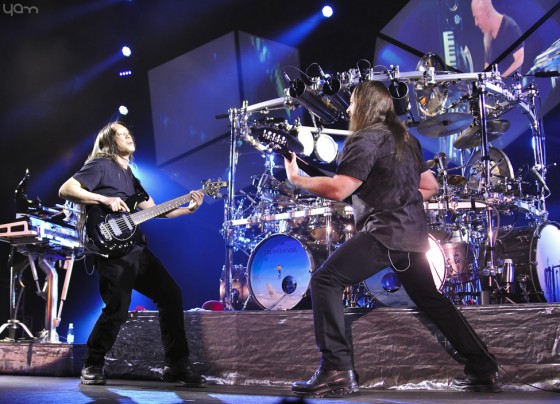 Even though I was only there for about 15 minutes, I managed to see quite a bit: a long introduction to the show before the band came out, a solo battle between the bass player and the guitarist and a short drum solo. One of the fans I talked to after the show told me that from his perspective, the show was excellent and had a good mixture of new and old songs. The only downside were the acoustics of the arena, which didn’t match the band’s sound and took away some of the feeling.

I will be honest, Dream Theater isn’t really my kind of rock, and I don’t know why. I mean, I should like them because the tempo is quite high, the musicians are good at what they do and the lyrics are not that stupid. But still, there is something that makes their music a bit… boring. Therefore I am actually pretty pleased that I don’t have to write a review about their performance and only this summary of impressions that I got during the show.